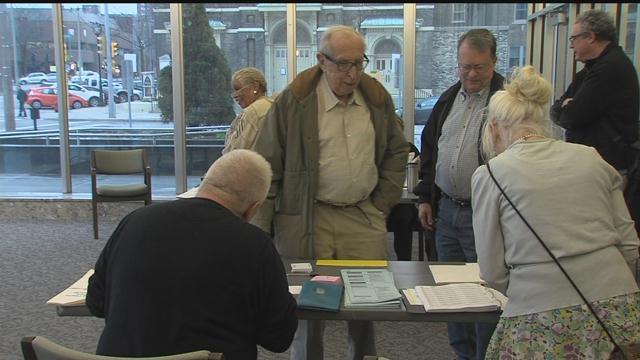 Tuesday's voter turnout is expected to be about 40 %, much higher than in past elections.

But if you are worried about waiting in line early voting is still an option.

Al Barrett says he makes it a point to vote every year.

“We don't want to be sitting back letting the wrong people make those decisions. Its the only way to voice our opinion,” said Barrett.

Kevin Clemence told his boys that on the way over to cast his ballot.

“On the drive over I really wanted to explain to them what the overall importance. Put it in terms that they can understand. Tell them we are trying to pick a team captain today to represent,” said Clemence.

But both of these Waukesha County residents agree this year is different.

“I think more than ever this vote is going to be critical. I think everybody should get out and vote,” said Barrett.

The fight for the White House has been tense. But the tension is giving early voting numbers a boost across the U.S.

“I know very well who I don't want in that position,” said Barrett.

Kathleen Novack is the Waukesha County Clerk and says just because of the presidential race, she expects 80% of registered voters there to come out on Election Day.

“There is just almost a frenzy in some places as far as getting out and voting,” said Novack.

Novack admits since candidates have their eyes fixed on Wisconsin.

Novack says she ordered enough ballots for a 100% turnout.

You have got until tomorrow night for early in-person absentee voting.

On Tuesday polls open at 7 a.m. and close at eight at night.