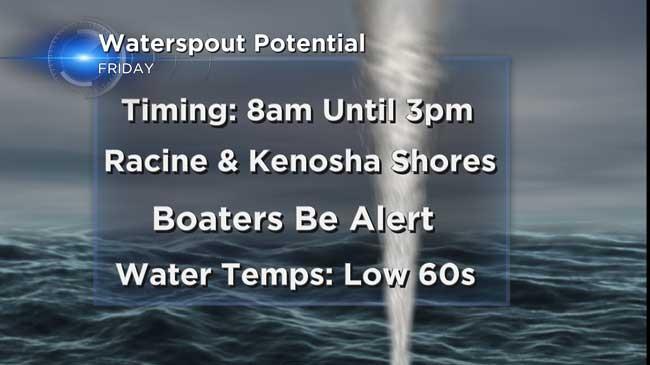 The early fall season is a very interesting time along the coast of beautiful Lake Michigan.  Water temperatures are typically in the lower 60s and will start falling as we go into October.

The warmer surface water can give way to waterspouts in September.  A strong upper level system will traverse across Wisconsin Friday morning into the afternoon.  Strong instability will occur when that cold air overrides the relatively warmer surface waters.

There's plenty of relative humidity to go along with the instability, so those ingredients could come together Friday to produce an isolated waterspout.  The greatest chance for waterspouts will occur between 8 am and 3 pm, especially across Kenosha and Racine counties.

You might remember the waterspouts near Kenosha that occurred September 12, 2013.  There was even a funnel reported in the city at 94th St. near Lake Michigan.

If you have boating plans please be aware of changing weather conditions.  Many times radar doesn't see the waterspout circulations, so tornado warnings aren't always issued.  Waterspouts that aren't associated with a rotating updraft of a supercell thunderstorm are known as \"non-tornadic\" waterspouts.  They are the most common.  Most remain below EF-0 winds of 65 to 85 mph.