Waterford man dies after being hit by car on Highway 83 in Waukesha Co. 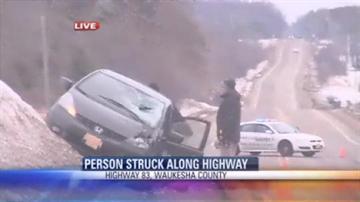 HARTLAND -- A 42-year-old man from Waterford died Tuesday morning after being hit by a car heading southbound on Highway 83.

It happened around 6:30 am near the Waukesha and Washington County line.

The Waterford man was driving northbound on Highway 83 when he hit a deer.

The man got out of his car and the sheriff's department believes he was trying to move the deer out of the road.  That's when he was hit by a car driving southbound.

He was taken to an Aurora Hospital in Summit where he died.

The southbound car was smashed up. The windshield and front drivers side was crushed.

The Waukesha County Sheriff's crash investigation team was on scene for almost three hours. The highway was closed for about three hours as well.

The driver who hit the man was a 44-year-old man from Hartford.   He is cooperating with police. He was not injured.