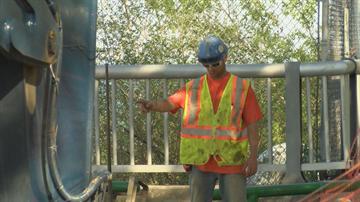 MILWAUKEE -- City officials announced a major break in the water main breaks that have burst pipes across Milwaukee for several days.

\"We think we're lucky that we found it where we found it,\" DPW Commissioner Ghassan Korban said.

Tuesday, DPW crews discovered a leak in a large pipe at the Texas Avenue pumping station.  It's at a spot Korban says crews can fix fairly easily.

\"The main that pumps water to the Howard plant is not very deep,\" Korban said.  \"It's about eight to ten feet deep.\"

Over the weekend, leaks at the station forced workers to shut down the pumps.  That meant the Linnwood treatment plant needed to boost its pressure, causing more than 75 breaks across the city.

\"The scale and the number of water main breaks had exceeded what we expected,\" Korban said.

\"I've heard everything from, 'Can we drink the water,'  to, 'I think I might have water in my basement,' to 'What's going on,'\" 6th-District Alderwoman Milele Coggs said.

Wednesday, Coggs demanded answers from the Water Works department at City Hall.  The biggest question -- is our aging infrastructure to blame?

\"We do the worst ones first and we will continue to take that very logical approach to how we do it,\" Water Works Superintendent Carrie Lewis said.

The city tries to replace 15 miles a year at $1 million a mile, but lately the money's only been there for two or three miles.

\"There's no way you can be so efficient that you can have $15 million extra a year to put into water main replacement,\" Lewis said.

That could mean the utility ends up charging customers more to prevent these breaks from happening.

\"Paying the price necessary to keep that flow of water coming is something we have to look at seriously as a city and as residents and as taxpayers,\" Coggs said.

Crews were excavating the ground around the pipe on Texas Avenue Wednesday evening.  Commissioner Korban expects the leak to be fixed and pumping restored in less than two weeks.