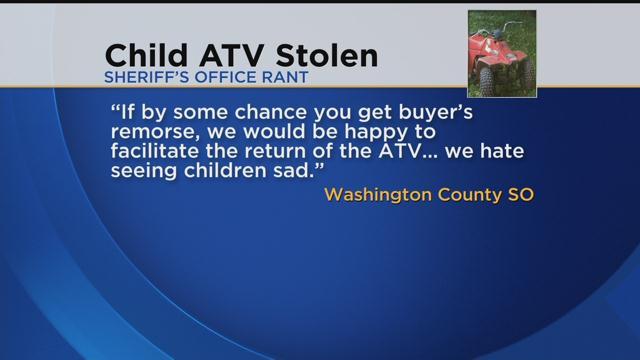 The Washington County Sheriff's office is calling out a thief who carried off a well planned ATV theft that has had a devastating impact on the child who was selling it.

The youth ATV was stolen on Friday, despite being locked up with a cable.

To the suspect that took the child’s four-wheeler:

The Sheriff’s Office responded to the 5300 block of Hwy 167 this past Friday morning to take the report of the stolen 1998 Honda Four Trax youth ATV. As you are probably aware, the unit was last seen on 10/13/16 at 8:30 p.m. and disappeared over the night-time hours. The investigating deputy was impressed with your sheer dedication and preplanning as you not only had to cut the cable that was intended as a deterrent to people like yourself, but also pushed the youth ATV over 300’ down the shoulder of Hwy 167 to your waiting get-away vehicle.

Investigating deputies are still trying to determine why the missing youth ATV was for sale. One of the possibilities we are contemplating is that the child, who owned it, outgrew that smaller model - which he diligently saved up to buy – and was going to use the proceeds from the sale to upgrade to a larger model. Don’t worry, it was only valued at about $750 so it will not take the child that long to make up the difference for the “screaming deal” you got on it. Fall is here so there are plenty of lawns that could use raking.

If by some chance you get buyer’s remorse, we would be happy to facilitate the return of the ATV to the other child. Out of consideration to you, and your child, we will make every effort to pick the ATV up when your child is not around; just like you did.

We realize this is a bit self-serving and selfish, but it may make it a bit easier on us when we pick it up; we hate seeing children sad.