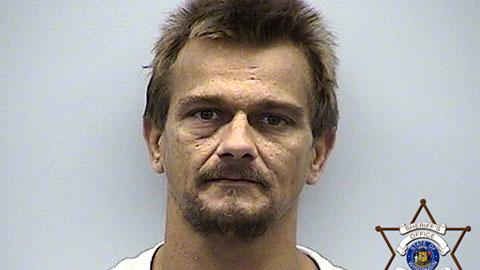 Washington County Sheriff's Office is looking for a man who alleged pulled  a long gun on another man during a fight in the Town of Wayne on Memorial Day.

On Monday evening at 11:17 PM, the Sheriff’s Office was dispatched to a residence in the 6000 block of 6011 Cty Tk D in the Town of Wayne for a disturbance call.

According to Washington County Sheriff's Office, initial reports were that two male individuals became involved in an altercation which resulted in one male subject pulling a long gun on another male subject.

No shots were fired and the suspect fled the area prior to law enforcement’s arrival. Sheriff’s Deputies spent 4.5 hours on scene as there was some belief the suspect may have returned on foot. Charges have been requested on the known suspect and the investigation is ongoing.

The suspect has been identified as Carey Leonard West DOB 10-22-71.

He is described as 44-years-old and 5-feet 9-inches tall. He had blonde hair and green eyes.