8 AM Update: Strong thunderstorms moving through

8 AM Update: Strong thunderstorms moving through

A shelf cloud with a strong thunderstorm just moved over Milwaukee and Waukesha and has now passed south of I-94. Heavy rain, gusty wind and frequent lightning can be expected as the storms move south. No severe weather is expected this morning. 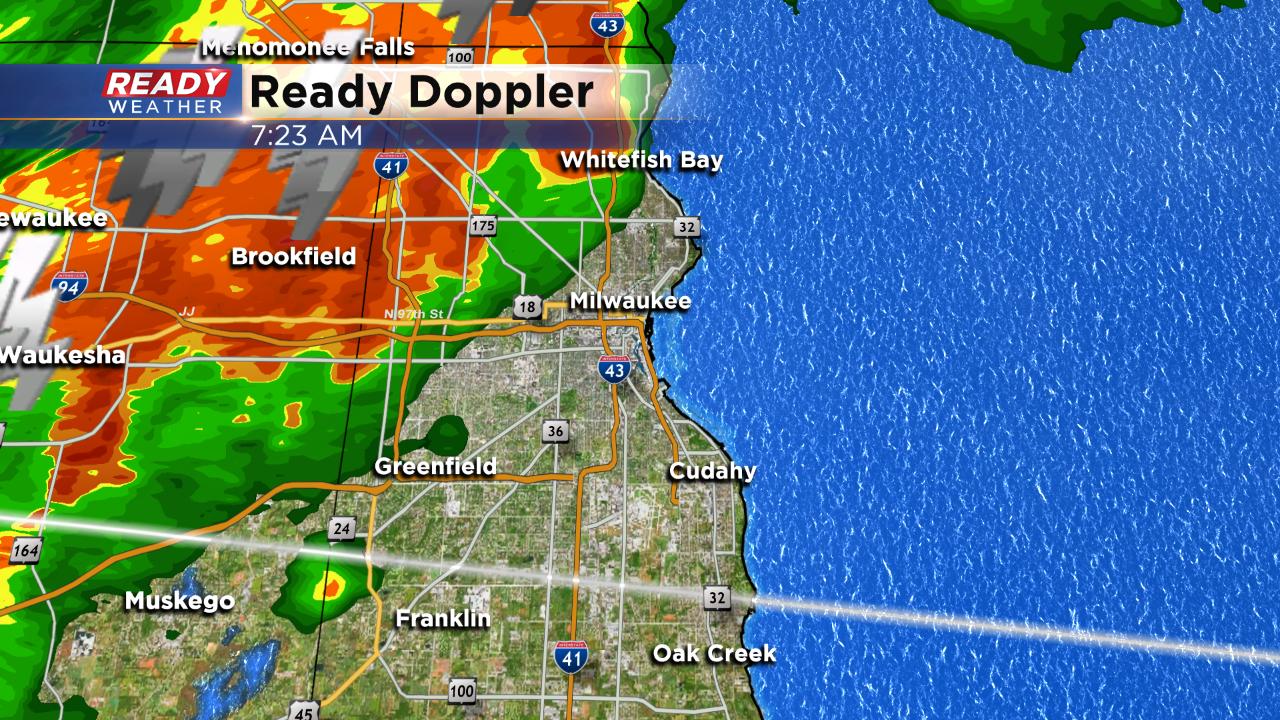 Thunderstorms continue to push south. The storms are not severe but wind gusts up to 40 mph are possible along with heavy rain and frequent lightning. Some storms are producing over 100 lightning strikes every 15 minutes. 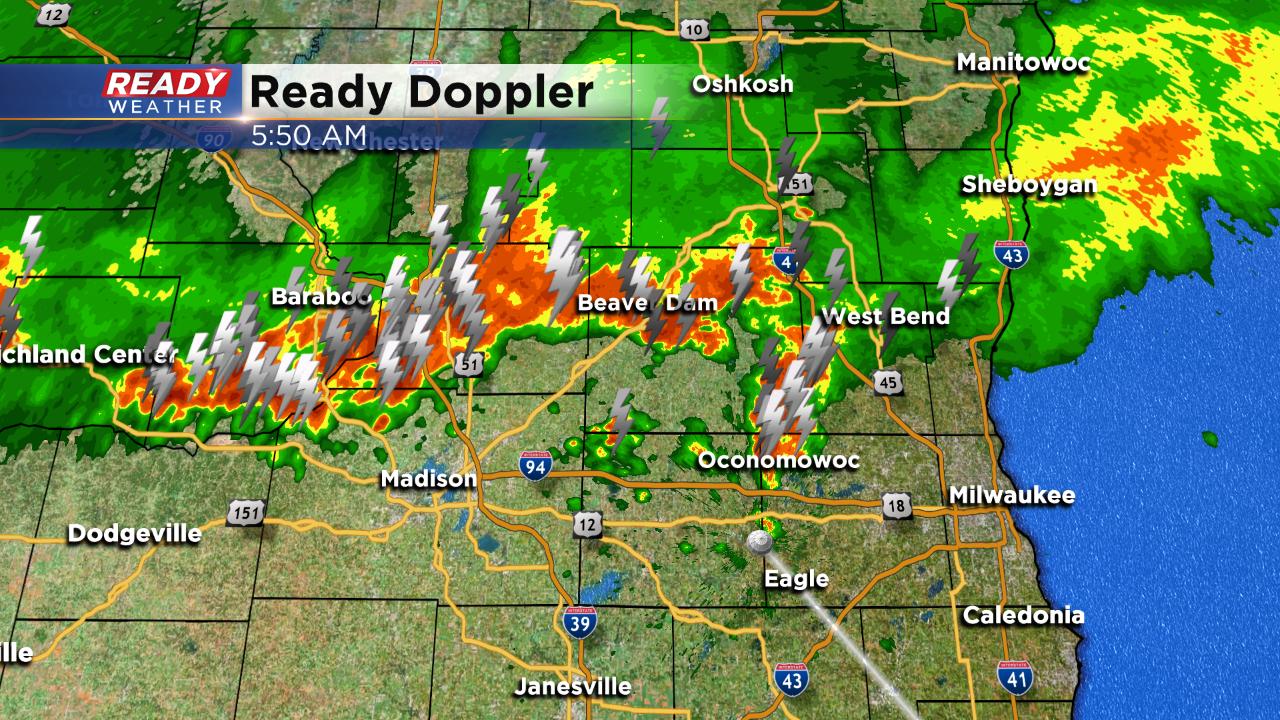 The morning storms should exit our local area after 10 a.m. giving us a break until the early afternoon when pop up thunderstorms are possible through the evening. Strong storms are once again possible later Friday.

Thursday's round of severe storms caused lots of damage, especially in Waukesha County around Carroll University. A microburst with strong wind may have been the cause of the damage.

Early Friday morning another round of storms is rolling through, this time sub-severe. Although no severe storms are expected, heavy rain and frequent lightning are being observed. 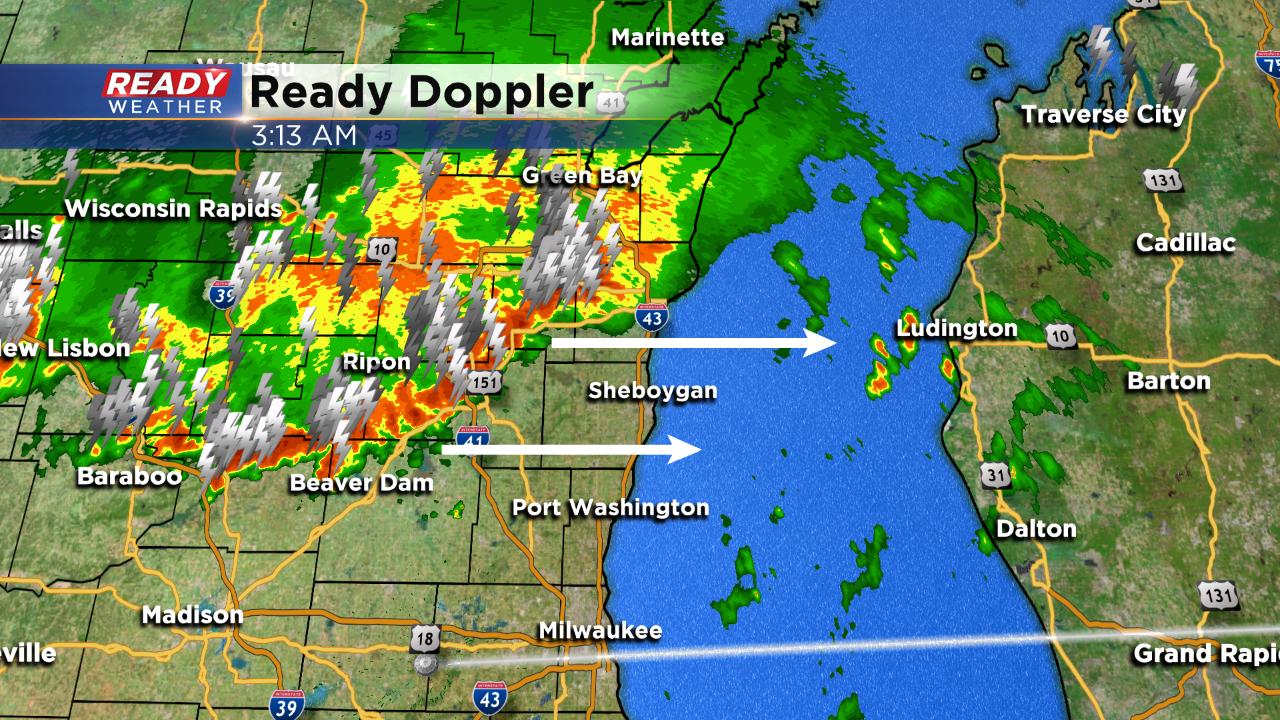 ------
6:00 PM Update:  Still strong to severe storms reported over Kenosha and Racine counties.  Most of the severe watches have been dropped as the intense line has already moved through.

Expect a weakening of the rain and storms over the next hour. 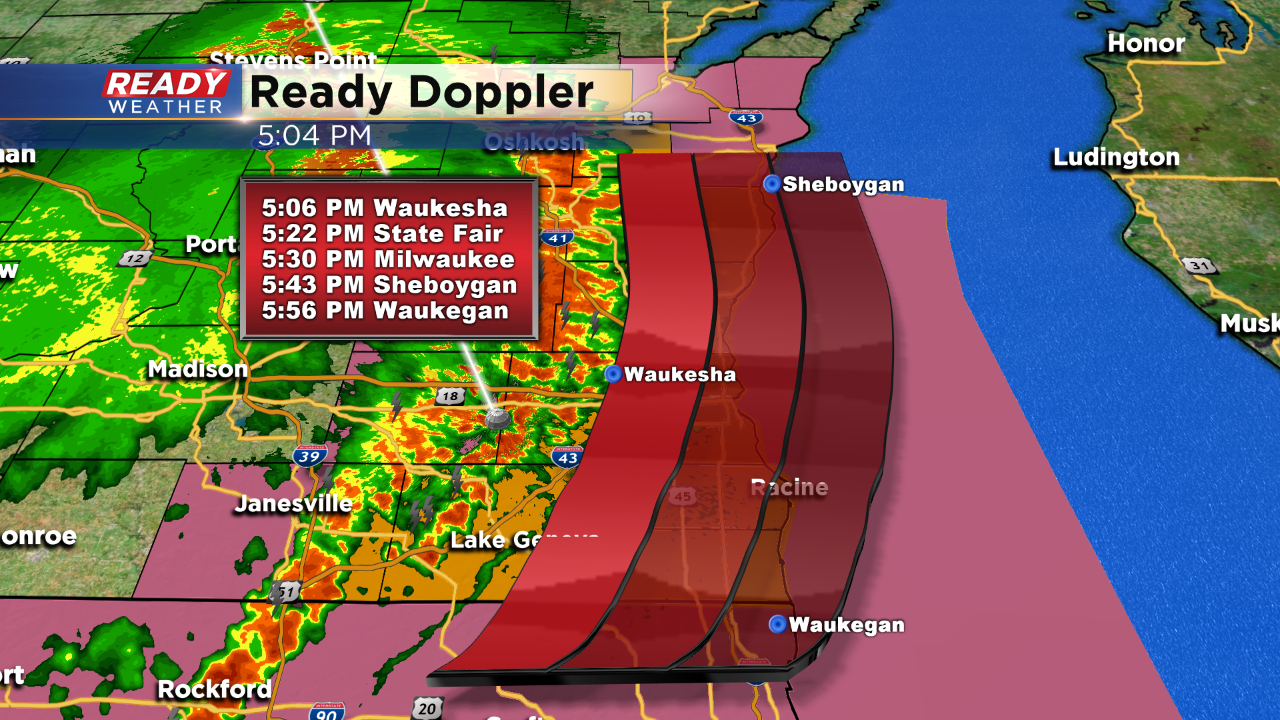 5:00 PM:  Damaging winds are likely along the leading edge of this intense line of showers and storms.  Reports of isolated 60 mph wind gusts have been reported with trees down.

Here's the latest storm track that includes downtown Milwaukee at 5:25 pm.  Damaging winds to 50 mph are likely along with very heavy rainfall. 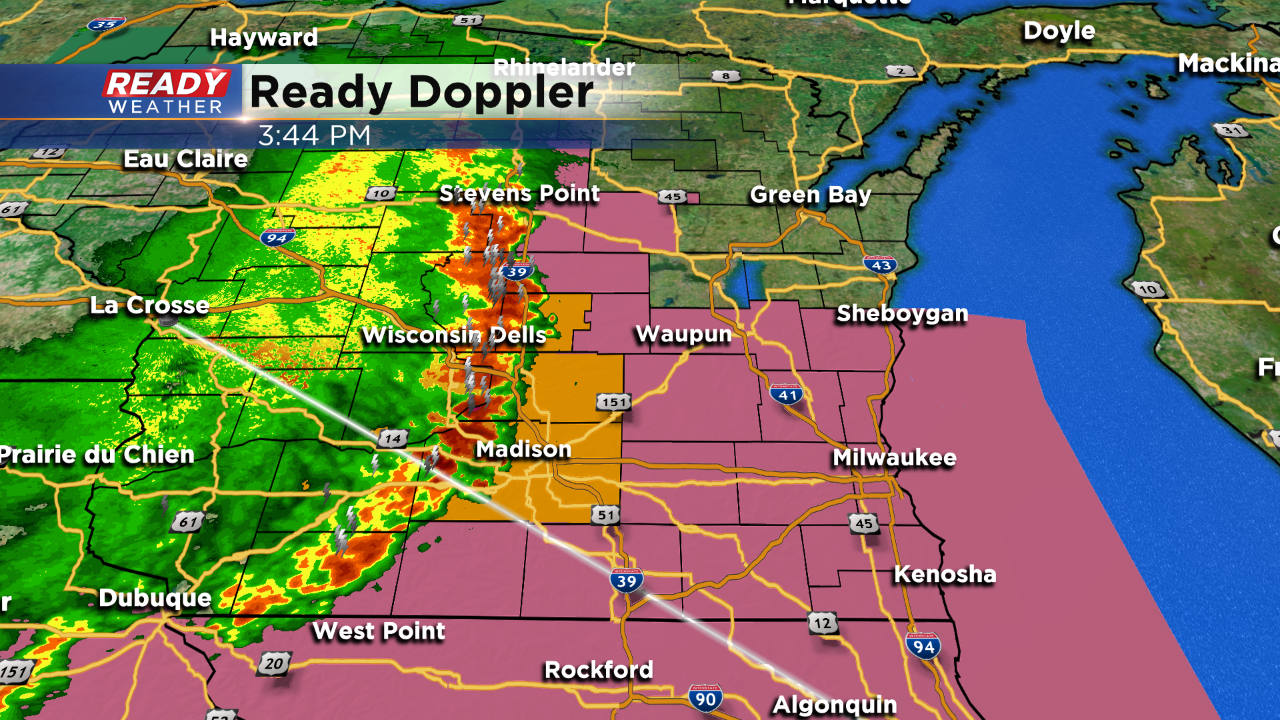 4:00 PM:  A new severe thunderstorm watch has been issued until 9 pm.  A line of strong to severe storms continues to race east.  Damaging winds to 50 mph are the greatest threat along with very heavy rainfall.

There have been reports of trees down in the western part of the state.  Those storms are expected to be at Summerfest around 5:30 pm. 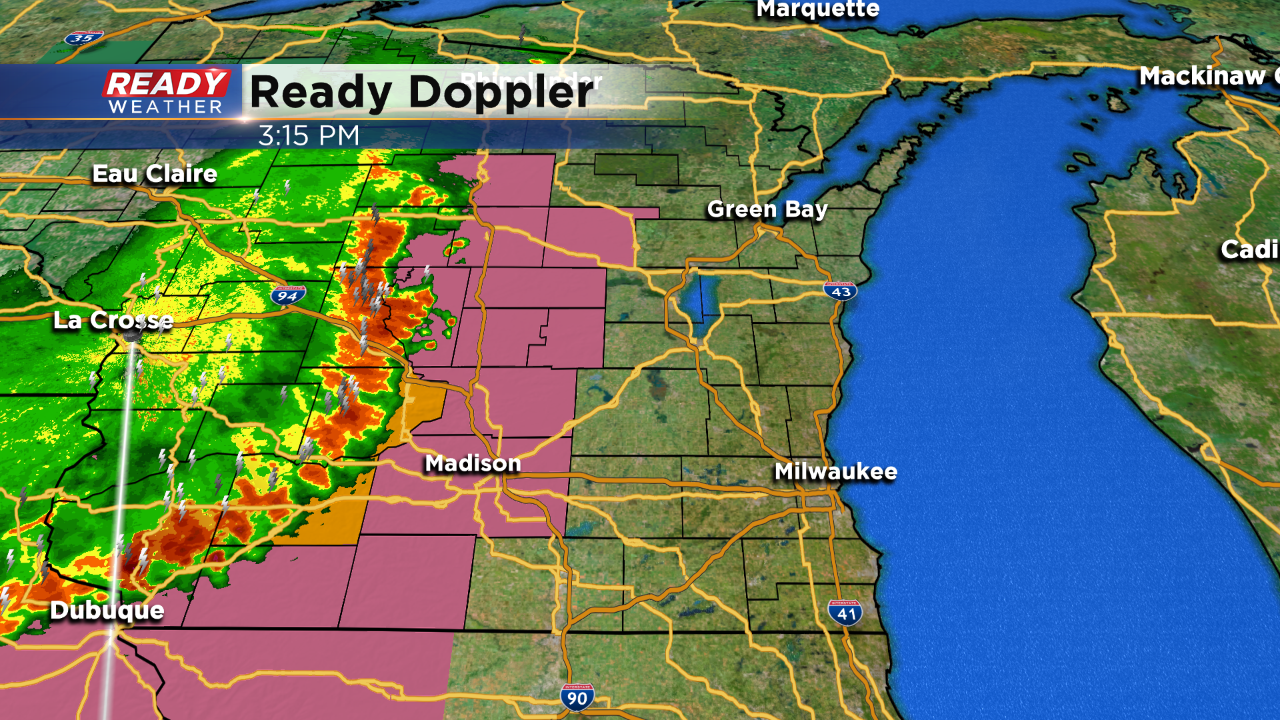 Temperatures this afternoon have climbed into the lower 80s with decent humidity.  A severe thunderstorm watch continues to our west until 7:00 pm.  There is a chance it gets extended; however, overall the intensity of storms has decreased.

We will expect these showers and storms to move through between 5 pm and 10 pm.  Gusty winds and heavy rainfall will accompany the storms.

Updated: 1:30pm The National Weather Service has issued a Severe Thunderstorm Watch until 7pm, just west of our viewing area.  It's for a long and well defined line of storms, seen here: 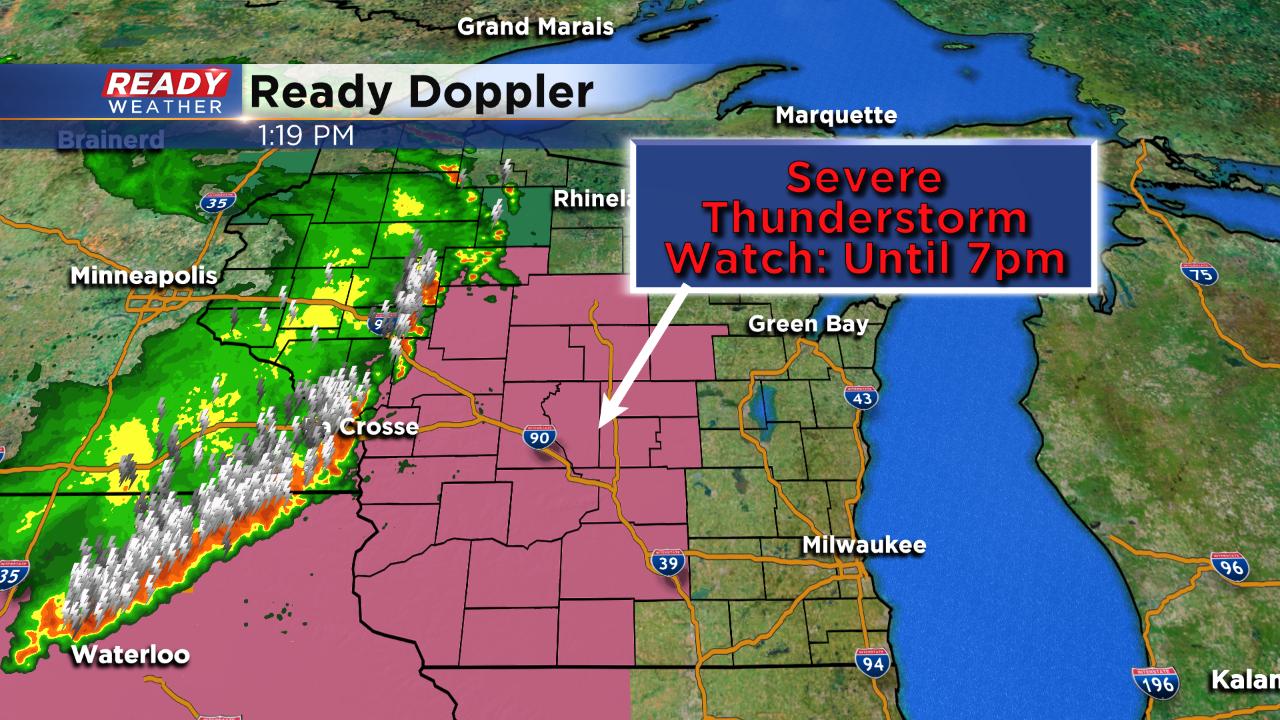 You can see the frequent lightning overlay on the radar. And we've had a few warnings on and off with this batch of storms. There have been a couple reports of wind gusts around 43-51 mph in Rochester, MN and more recently at the airport in La Crosse. A handful of penny to quarter size hail reports have come into our weather office as well. It appears that this first line may break apart and miss the area, however, if it holds together keep an eye out between 6-9pm for any storms. It still appears the better chance for another newly formed line of storms arrives after 2am Friday morning. Regardless, with all the heat and humidity around, downpours and gusty wind could accompany any storms that do fire.

The Storm Prediction Center has increased the severe threat in central Wisconsin on Thursday to an "enhanced" risk which is a level three out of five. A cluster of storms has already been severe as it moves through Minnesota and is expected to stay that way through the rest of the morning and afternoon. 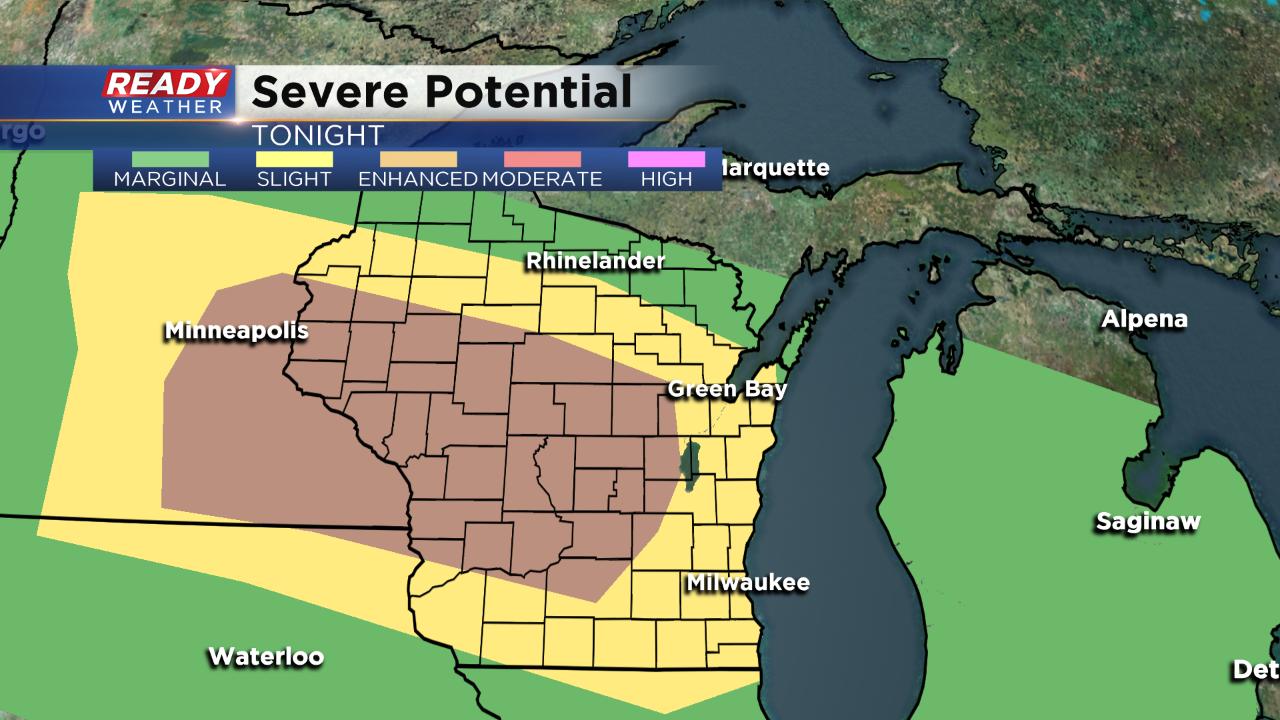 Storms should weaken a little as they reach southeast Wisconsin, but some of our far western communities are included in the enhanced risk. Timing for storms remains the same - after 7 p.m.

After a gorgeous start to Summerfest Wednesday, we stay with the warm and humid conditions into the foreseeable future. One word can describe the weather pattern from now through at least Independence Day: Florida-like. Each day looks warm and humid with highs in the 80s and there's a chance for storms almost every single day. Humidity will hang out in the noticeable or muggy category the next three days and then stay there through next week. 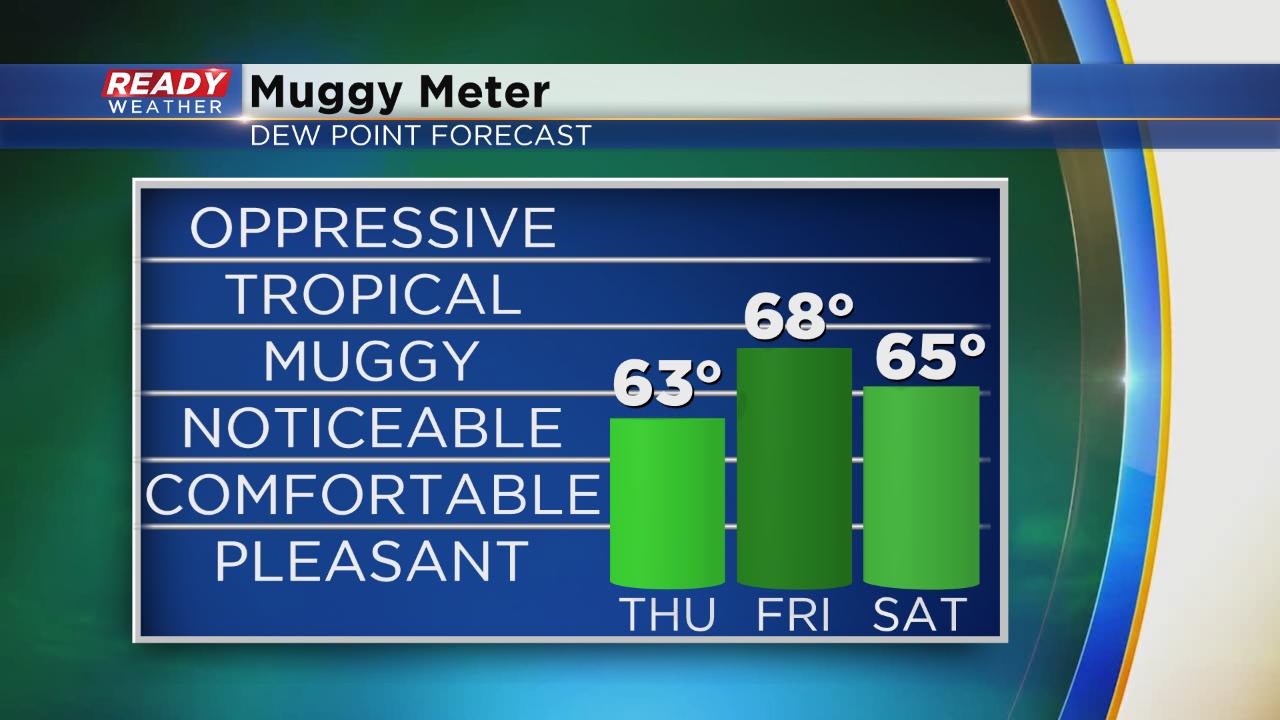 If you are going to Day 2 of Summerfest expect great conditions early, but then a chance for storms in the evening. 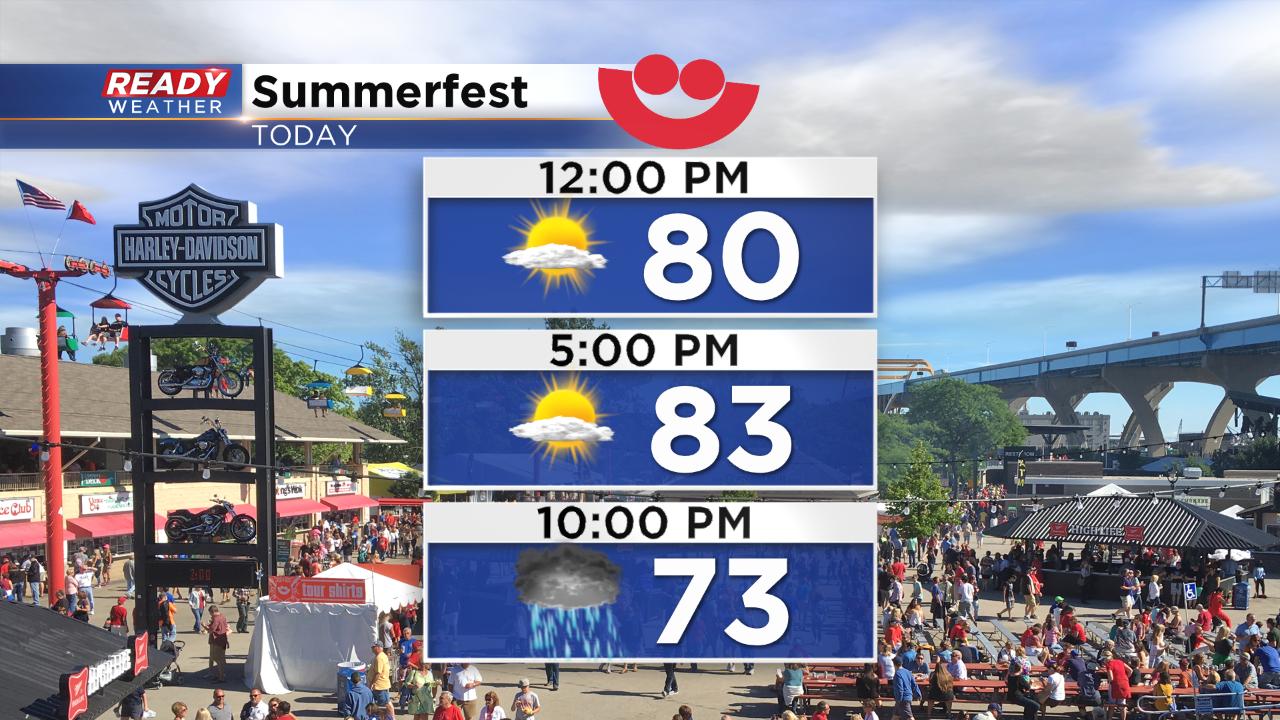 A cluster of severe storms has developed over the Dakotas Thursday morning and is expected to barrel through Minnesota and Wisconsin the next 18 hours. Locally, the chance for storms starts after 7 p.m. with storms lingering through Friday morning in some spots. 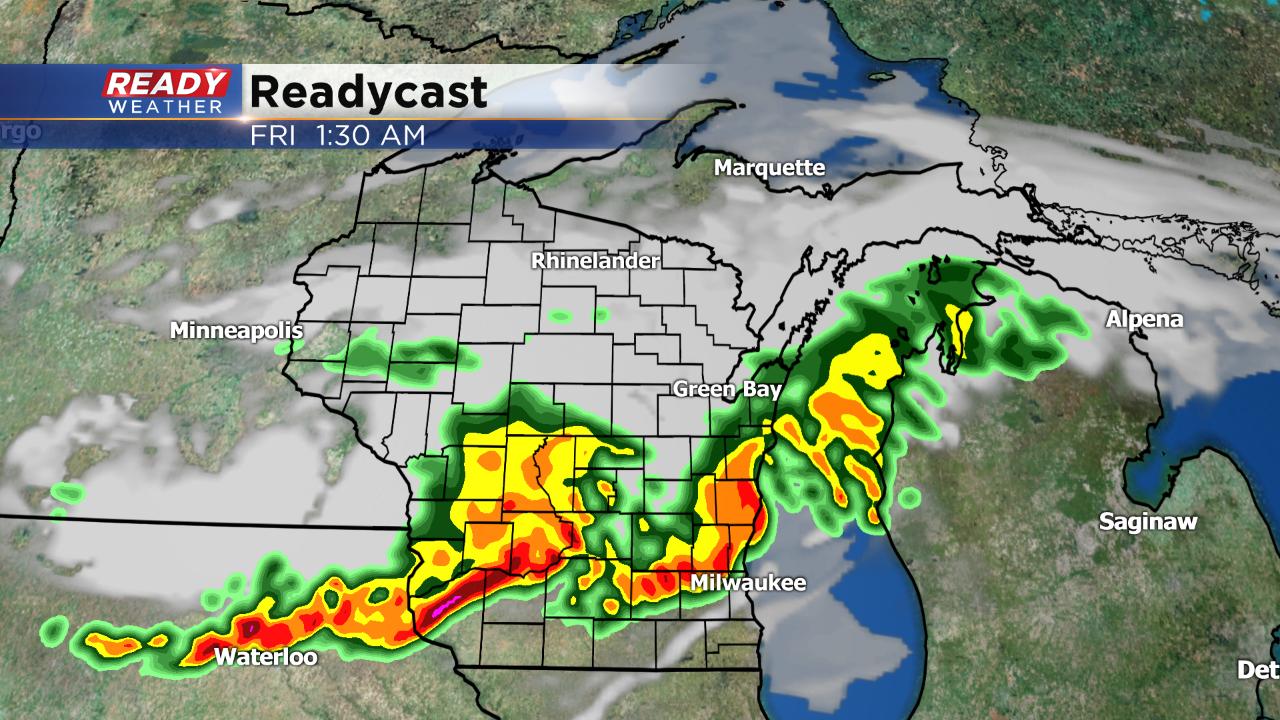 Some weather models have the initial cluster of storms weakening, but have some redevelopment behind it increasing our chance for rain. The Storm Prediction Center has placed all of southeast Wisconsin in the slight risk for severe weather. Damaging wind will be the main threat, but with so much heat and humidity hail will be possible too. These storm clusters are also known for bringing heavy rain. 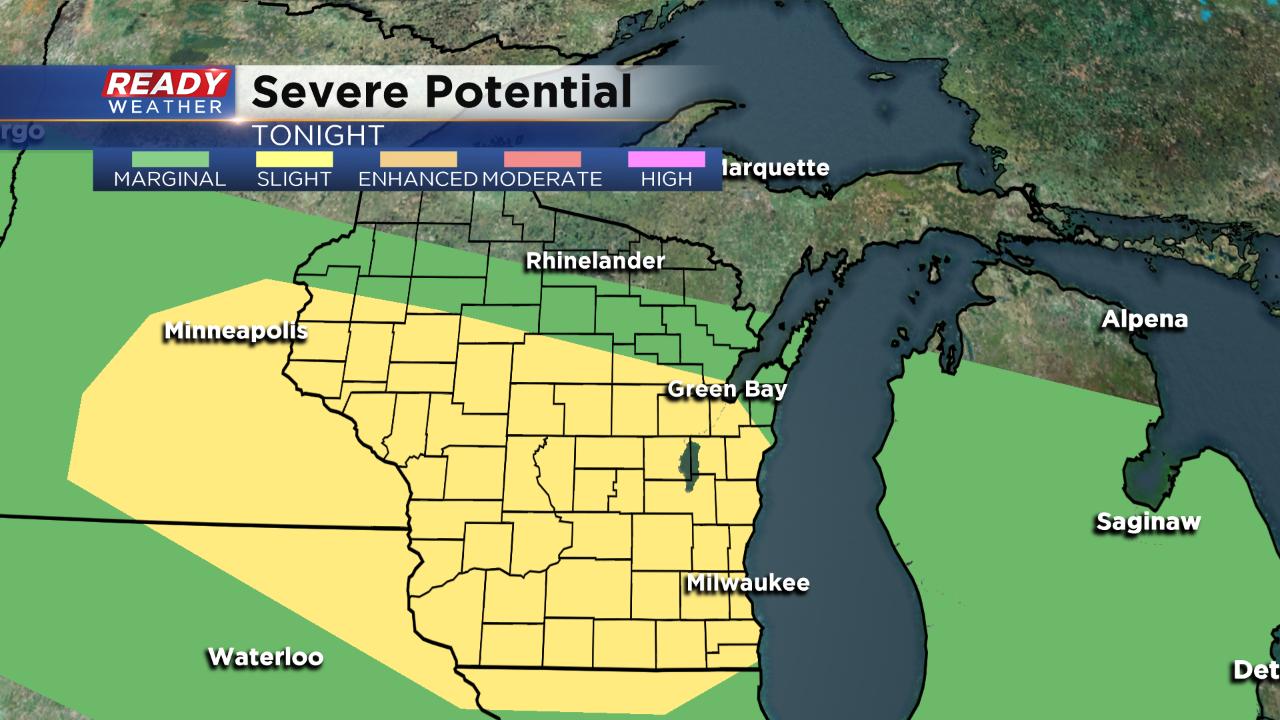 Download the CBS 58 Ready Weather app to track the cluster and any redevelopment from the Dakotas into Wisconsin.