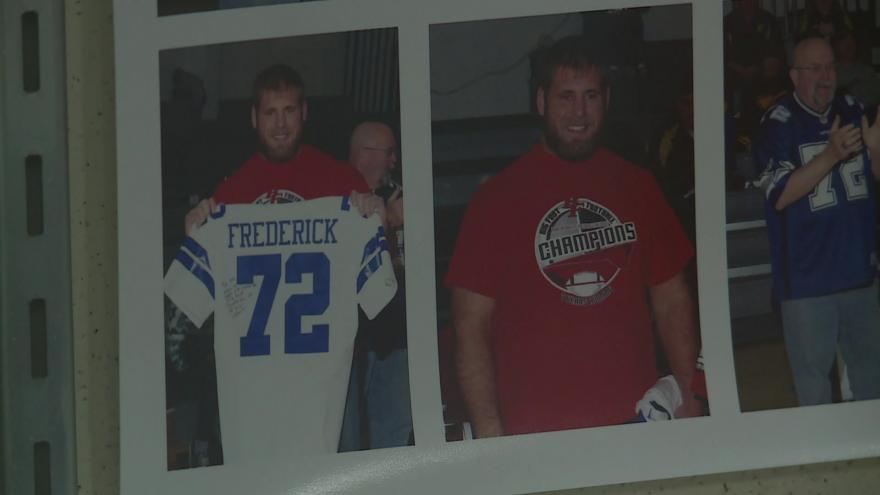 Many in Wisconsin have followed the journey of Travis Fredrick. The Walworth County native played football at UW-Madison and has been on the Dallas Cowboy's roster

Since 2013, until an illness took him off the field a couple weeks ago. At Big Foot High School, where his football journey started, they're all rooting for him to pull through.

"I think he leaves a big legacy. I mean, for the young players we have here even today, to be able to look at someone who came from this small high school, five-hundred-some kids, and be able to work hard and be able to achieve a dream and a goal. Not only of going from here to college, but college to the NFL," said Wes Courier, Big Foot Football Asst. Offensive Coach.

Courier says Big Foot High School hasn't forgotten about the days Travis Fredrick played under their Friday night lights. He trained Fredrick since he was in middle school. Fredrick graduated in 2008.

"I actually started training him back in 8th grade. Once he got to high school, him and three other guys on the team would come in every morning at 6:00 and we would work out in the morning... then he'd go to class, he was that type of guy -- hard worker," said Courier.

"When he went to the state title game [as a senior], we were on the sideline helping out. When game was over, Travis made a point of seeking us out after the game, coming and telling us, 'Hey, you two were instrumental in helping us get here,' and he really wanted to express his appreciation. I remember being so impressed by that, that a high school senior would come back to his freshman coaches at the time and show appreciation...it was so indicative of who he was," said Hollihan.

"It was awesome to see, but not surprising because of who he was," said Hollihan.

But when Fredtrick couldn't return to the field this season -- that was a surprise.

"It was kind of a shock to hear exactly what it was, because you'd think it would be a football injury, not some kind of viral type," said Becky Peterson.

The Big Foot parent says she's been following Fredrick's status closely, after what she thought was a pre-season injury turned out to be an auto-immune disease.

"My sons love him to death, we've been friends with him a long time, he's a hard worker, he's a strong guy, we wish him a speedy recovery and it sounds like he's on the right track," said Peterson.

Travis Fredrick announced to his fans on Twitter Wednesday he's been diagnosed with Guillain-Barré syndrome which is an auto-immune disease.

An update on what’s going on with me: pic.twitter.com/KSkMUvyCWk

He goes on to write, "I am very optimistic about my condition and the immediate future."

Fredrick says there's no time table on when he can return to the field.

Courier sent Fredrick well wishes earlier today, and says Fredrick still has the positive attitude he did in high school.

"He's a very positive guy. That's the one thing he said to me, 'We caught it early. I'll be back in no time,'" said Courier.

"It's scary to see, but we're hoping for the best, and he has to know he has support from his family at big foot and throughout the state."