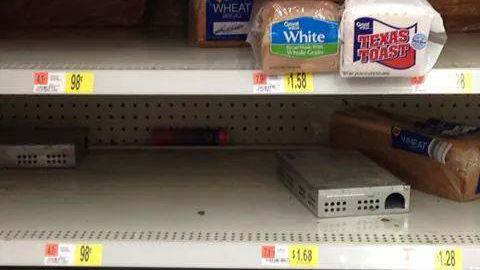 At the behest of a viewer, CBS 58 News went to Walmart Corporate offices to find out why mouse traps were in full display on the bread aisle of its West Bend store.

The store in question is located near Paradise Drive, close to U.S. 45 in Washington County.

The viewer claims to have spotted the traps on Tuesday evening and posted a photo on the CBS 58 Facebook page to prove it.

In the photo you can clearly see two metal boxes on the shelves near the loaves of bread.

But, he does say store policy is to have the mouse traps under the shelves.

He says the traps are there strictly for monitoring purposes and there is no rodent infestation at the store.

\"What could have occurred is maybe somebody sweeping out and the device got put into an aisle and maybe somebody may have then placed it on the shelf which is where it's not supposed to be,\" Nick explained. \"But just out of an abundance of caution, we did call out experts to look throughout the store and they were able to give the store a clean bill of health.\"

Still, the Department of Agriculture which handles these sorts of things tells CBS 58 is will have to investigate now that it has become aware of the photo.