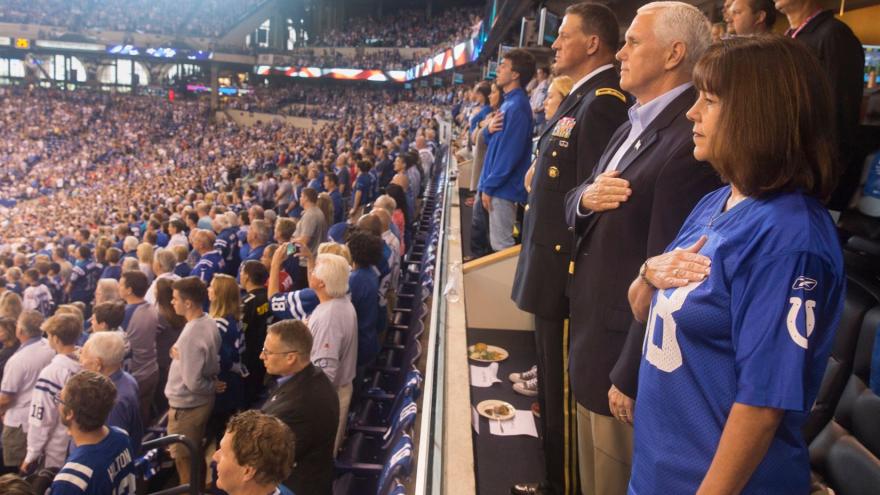 Washington (CNN) Vice President Mike Pence left a football game between the Indianapolis Colts and the San Francisco 49ers on Sunday after some players knelt during the National Anthem, saying he did not want to "dignify" the event.

"I left today's Colts game because @POTUS and I will not dignify any event that disrespects our soldiers, our Flag, or our National Anthem," Pence wrote on Twitter.

The vice president went on to issue a full statement opposing the protest.

I stand with @POTUS Trump, I stand with our soldiers, and I will always stand for our Flag and our National Anthem. pic.twitter.com/B0zP5M41MQ

President Donald Trump tweeted afterward that he asked Pence to leave the stadium.

"I asked @VP Pence to leave stadium if any players kneeled, disrespecting our country. I am proud of him and @SecondLady Karen," Trump tweeted.

The pool of journalists accompanying the vice president was not allowed into the stadium and was asked to stay in their vans. They were told by a staffer that "there may be an early departure from the game," but were not given any further details.

Some criticized Trump and Pence for the walkout, with Hawaii Democratic Sen. Brian Schatz tweeting, "Wait. This was orchestrated to make a point? That's not an inexpensive thing to do."

Pence, the former governor of Indiana, earlier posted a picture of himself and his wife Karen Pence at the Lucas Oil Stadium in Indianapolis, he in a Colts hat and shirt and the second lady sporting a team jersey.

After his exit, Pence posted a photo of himself and his wife standing for the anthem at the game on Sunday.

"Amen. After almost a decade it's great to have leaders who have pride in our country again," he wrote.

An aide to the vice president told reporters traveling with him that Pence left the game in Indianapolis after several 49ers players knelt during the anthem.

Kneeling during the anthem was brought into the mainstream by former 49ers quarterback Colin Kaepernick, who said it signifies a protest for racial justice.

Trump has railed against the form of protest, calling it disrespectful to the flag and to veterans. He has tweeted repeatedly on the issue, including calling for a boycott of the National Football League unless the league takes action against players who protest.