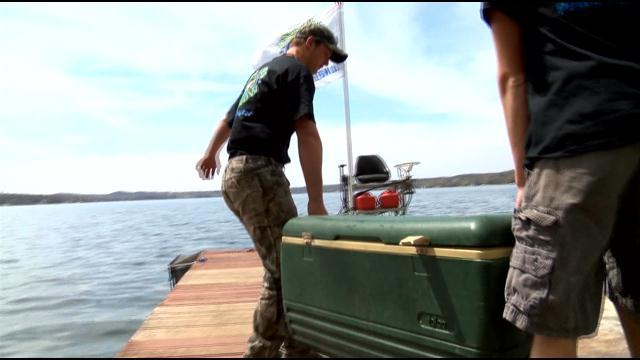 \"The normal thing was to always catch the fish, keep it and show it to your friends,\" fisherman Tom Koepp said.

It's a tradition Koepp did plenty of. But in the last decade and beyond the opportunities to catch walleye plummeted.

\"People catching them and cleaning them and eating them,\" Koepp said. \"I'm guilty of some.\"

With a guilty conscience and a drive to improve conditions, Koepp turned into a bit of a scientist.

The life-long fisherman formed a local Walleyes for Tomorrow chapter in 2013. Koepp expected a handful of people to show up, but several dozen came to the first meeting.

Now 160 members strong, the group built a \"Walleye Wagon\" where they can fertilize and grow millions of walleye eggs in tubes and tubs.

\"Every day after work, we're here,\" Koepp said. \"The second and third shifters after work, we switch. It starts off just checking the eggs and then it leads into what we have now. It's 24/7.\"

Around the clock work, which produced four million eggs last year and six million this year, all released into Pewaukee Lake. But it doesn't happen without some education from the DNR and help from some younger anglers.

\"We wanted to do something about this because who doesn't like walleyes,\" Pewaukee High School chapter member Jayden Schmitz said.

Brothers Jayden and Jarrett Schmitz and Koepp's son, Dakota, worked almost every day in the wagon the past month. Some gave up their spring break to be there.

\"The main few weeks in the spring time, this is what we work for,\" the younger Koepp said. \"You're down here every day almost.\"

A hands-on learning experience to bring walleye back kids and adults like Koepp hope won't be needed too much longer.

\"I hope so because it's a heck of a lot of work that I could be doing work at home and make my wife happy,\" Koepp laughed.

Koepp's Walleyes for Tomorrow chapter hopes to see 10-percent of the walleye fry they release this year survive, but even a 1-percent rate would be a success -- still putting 60,000 fish back in the lake.