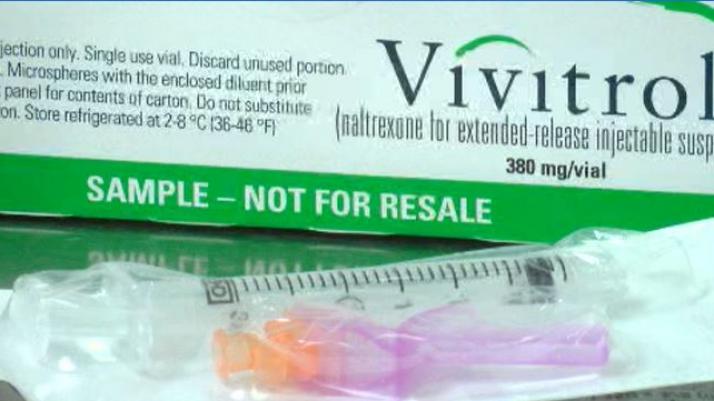 Hipolito Fonseca has been addicted to heroin and pills for the last six years.

"When you're high on heroin, you're addicted to it, your body needs it... you  just need something to deal with life," Fonseca said.

But over the years, Fonseca said he has tried quitting by using Methadone, a common treatment for heroin addiction. The medication helped control his withdrawal symptoms, but eventually, he ended up relapsing.

A few weeks ago, he was introduced to a woman named Gladys Quiñones, who mentioned a treatment he wasn't familiar with.

It's called Vivitrol. It consists of a once-a-month injection, approved by the Federal Drug Administration in 2010, that is now picking up steam.

"We are basically using science," said Dr. Manuel Thomas, of Viva Healthcare in Milwaukee. "Let's just block the part of the brain that receives that chemical. We just go in with another chemical and just block the receptor"

Dr. Thomas is one of the few physicians in the Milwaukee area who provides the treatment. He started doing so around July 2015, because he wanted to be a part of combating the addiction epidemic in Milwaukee.

"We cannot just wait and sit and let these people destroy their lives and their family's lives as well," Dr. Thomas said.

Thomas has about 35 patients so far. Including Gladys Quiñones' brother.

"My brother was in drugs really bad. He has been using heroin for 4 years," Quiñones said.

After hearing about Vivitrol, she convinced her brother to try it in August 2015. Since then, she said his life has changed.

"It's only one shot a month and he doesn't want no more drugs... it's amazing," she added.

It's an amazing transformation to some. But doctors warn, the injection alone is not a cure.

"The goal of this medication is to decrease cravings. That's all the medication does, it treats the biology of addiction," said Dr. Galvis-Reig. "I think it's a very good treatment and  could potentially revolutionize addiction treatment because of it's availability.

Dr. Galvis-Reig added he is currently offering the treatment to about 100 out-patients at the facility in Racine.

The injection can be costly, costing about $1,200 each.

"Getting patients funded and getting them treated is very difficult," he added. "State insurance does cover it completely. Private insurances for the most part have to co-pay."

A spokesperson for Vivitrol tells CBS 58, they offer a program called "Vivitrol Value" that covers up to $500 a month of co-pay or deductible expenses.

"Unlike many other assistance programs, there are no income requirements to be eligible, and the program covers patients who have insurance as well as those who are self-pay," said Jennifer Snyder, a representative for Vivitrol. "To be eligible patients must be at least 18 years old and they must be taking Vivitrol for an approved FDA indication. They cannot receive benefits from Medicaid, Medicare, or TRICARE or another federal or state healthcare program."

Regardless of the cost, Quiñones insists, there is a way to obtain it. That's why she feels the need to spread the word about the injection, because she believes it's saving her brother's life.

"A lot of people don't know about this injection... If I help my brother, I help everybody," Quiñones said.

So far, she has recruited four people, including Hipolito Fonseca. She hopes Vivitrol will change his life as well.

"I'm hoping for the best... I'm hoping to be a better man for me and my family," Fonseca said.