Visiting from India, grandfather partially paralyzed after encounter with police 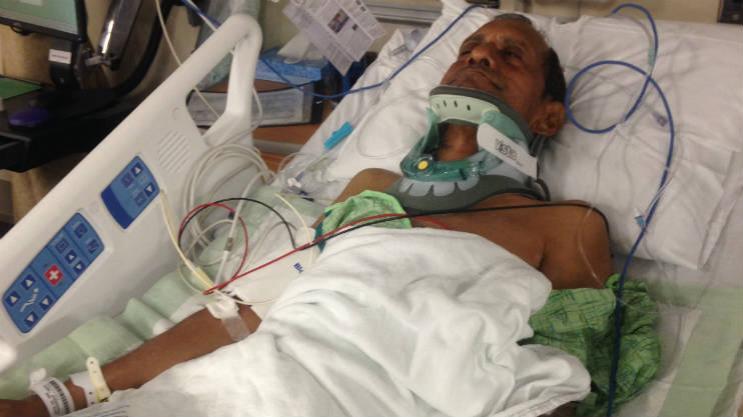 (CNN) -- It started out as a morning walk, but ended up with a 57-year-old grandpa laying partially paralyzed in an Alabama hospital bed.

Sureshbhai Patel required spinal fusion surgery to repair damage to his back when his family says police twisted his arm and forced him to the ground.

The incident began Friday when Madison Police got a suspicious person report.

Police say someone in the small community about 12 miles east of Huntsville called to report a man walking in neighbors' driveways and peering into garages.

\"The caller, who lives in the neighborhood did not recognize the subject and thought him to be suspicious,\" a statement from Madison Police said.

When police responded, there was a language barrier.

Patel, who is visiting from India to help take care of his developmentally delayed, 17-month-old grandson Ayaan, speaks little English.

Chirag Patel, told CNN Affiliate WHNT that his father tried to communicate with officers, telling them \"No English. Indian,\" when they approached. He also said his father gave police his address and pointed to his son's house.

Madison Police agree that there was \"a communication barrier,\" between officers and the elder Patel.

The police statement also says Patel reached into his pocket while speaking with the officers.

That's when officers forced Patel to the ground, leaving him with an injured neck and no feeling in his arms, the family says.

Months of physical therapy are ahead for Patel, who can now move his hands, but can't grasp anything, WHNT reported. Chirag Patel said his father can move his right leg but not his left

The officer involved in the incident has been placed on paid administrative leave until the investigation is complete, the police statement said.