Views on abortion to shake up campaigns, upcoming elections in Wisconsin

NOW: Views on abortion to shake up campaigns, upcoming elections in Wisconsin

Abortion has always been a key issue for voters in Wisconsin, but if an abortion ban goes into place candidates on the campaign trail are expected to capitalize on it to energize their base, said Mike Wagner, UW-Madison Political Science Professor.

"Local elections are going to be extraordinarily consequential across the state and country if the decision comes to pass the way we think it will," said Wagner.

Almost all abortions would become illegal in Wisconsin after a leaked draft memo suggests Roe v. Wade will be struck down. If that becomes reality, a state law passed in 1849 would go into effect making abortions criminal and punishable up to six years in prison. The only expectation is if a mother's life is in danger.

The debate comes during a heated midterm election in which all four Republicans running for governor praised the possibility abortions would become illegal in various Twitter posts. 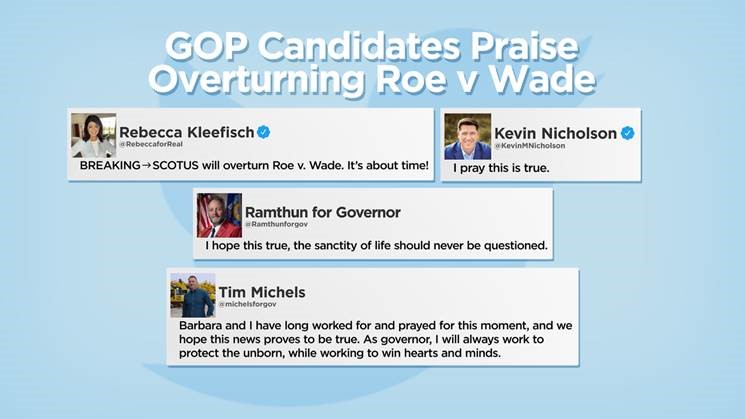 If the state were to elect a Republican governor this fall, it's unlikely any of the candidates or the GOP-controlled legislature would support exceptions to a ban on abortions for rape or incest.

Former Lt. Governor Rebecca Kleefisch, Kevin Nicholson, and newcomer Tim Michels have stated they oppose exceptions to include cases of rape or incest.

"Every life is precious, and as governor, I will work with the legislature to ensure the lives of the most vulnerable are protected," Michels said in a statement to CBS 58. "I believe whenever possible, we should always come down on the side of life.”

State Rep. Tim Ramthun has described himself as "a hardcore 100% pro-life without exceptions," in a video link posted on his campaign website.

Meanwhile Democratic Gov. Tony Evers is hoping to keep abortions accessible to residents. In a joint letter to congressional leaders, Evers joined 17 other states in demanding congress "to take immediate action to protect reproductive rights and access to abortion."

It's a message some political experts predict can benefit Democrats heading into the midterms.

"It's the group that is often at a disadvantage that will be more motivated to act politically," said David Canon, political science professor at UW-Madison. "I think Democrats will probably gain from more people coming out to vote than those who have stayed on the sidelines."

In October, a majority of Wisconsin voters believe abortion should be legal in all or most cases with 34% said it should be illegal according to a Marquette University Law School Poll.

With abortion on the ballot, Canon believes more voters -- especially women -- will turnout for the August 9th primary than in years past.

"I think turnout will be higher than it otherwise would have been and probably among that key demographic of suburban mothers, but women more generally," said Canon.