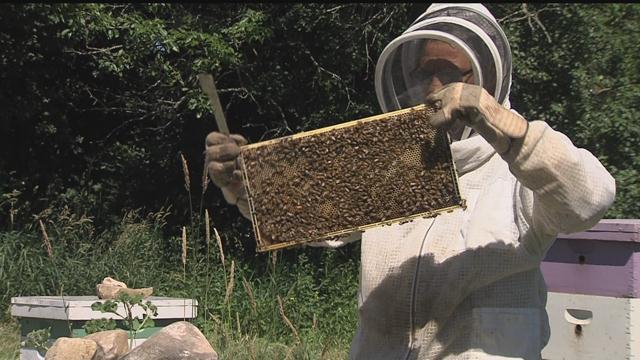 It’s been decades since Paul Javins served in Vietnam – but the memories still haunt him.

“A lot of flashbacks, a lot of bad stuff going on,” Javins said. “Lost temper, drank a little too much, partied too much, but I didn’t care.

He says his post-traumatic stress disorder is something most people won’t understand – at least not like the buddies who garden with him.

Javins is one of several veterans taking care of a community garden – an acre on Kohl Farm in Milwaukee. Vets getting treated at the Vet Center head out there a few times a week. It started about four years ago as another form of therapy for veterans dealing with the emotional wounds of war.

“It gives you a chance to be with veterans that had the same experiences,” Javins said. “That is very important to most of us.”

Counselors at the Vet Center say – it’s not really about the gardening.

“Our garden is not so much about growing plants and vegetables, but it’s about getting veterans to heal,” said Rodney Pearsall, a readjustment counselor at the Vet Center.

“It gives me an outlet,” Javins said. “You know, in the mornings we all meet as a group, which is really great. We get to sit around and talk -- and if we want to work, we can work. Sometimes we don’t do much work. We do a lot of talking.”

The talking helps. But sometimes, it’s about not talking at all.

“It’s nice out here because it’s nice and quiet,” Javins said. “It’s beautiful. You  get to think through problems.”

“They sleep better when they go to bed at night,” said Pearsall. “They have something good to think about for many of them its given them a family again. It’s hard not to be at peace out here. I think that’s one of the big things -- is that it gives them peace.”

“If you’re sitting at home doing nothing, you’re thinking about maybe combat experiences, or something that happened before,” said Javins. “Out here you don’t get that, you’re keeping your mind active. It gives us a guiding light to go by. If other guys can make it – why can’t I?”

Those working on the garden are hopeful for donations in order to purchase equipment to better maintain the plants and vegetables. If you are interested in donating, you can do so through the UW-Extension.