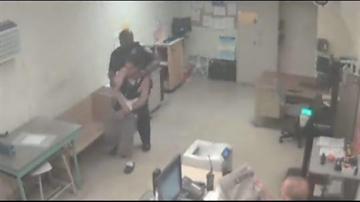 Video may be graphic to some viewers.

MILWAUKEE - Closing arguments begin Wednesday in the trial of a former Milwaukee police officer accused of slamming a suspect's head against a booking room wall.

Rodney Lloyd faces three and a half years in prison if convicted of felony misconduct in public office.

The man was handcuffed in the front because one of his arms was in a sling due to an unrelated injury.

Lloyd told investigators that the man was resisting, so he had to use his strength to restrain him.

The video shows what the criminal complaint describes as Lloyd \"forcibly driving\" the man's head into a concrete block wall.

A loud bang, believed to be the prisoner's head hitting the wall, is heard on the tape.

Lloyd took the stand in his own defense Tuesday and said he felt threatened by the suspect and had no intentions of hurting him.

Lloyd is appealing his termination from the Milwaukee Police Department.
Share this article: