Victims of Violence Remembered at "Stop The Violence Prayer Walk" 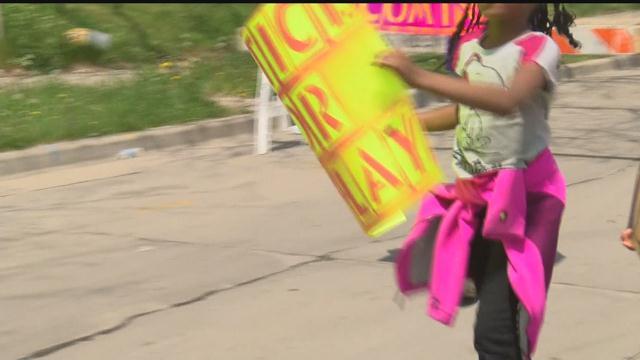 "Stop the violence. Stop the killing."

Those were the words chanted for hours on Milwaukee's north side Saturday. Milwaukee is the city that founded the International "Stop the Violence" Prayer Walk. Since then, it has caught on in 51 U.S. cities and 54 countries.

For Quinlan Bishop and his 10-year-old daughter have been affected first-hand by violence recently.

"It really hit her hard. It hit me hard," said Bishop.

Bishop's daughter's cousin was Za'layia Jenkins. After being shot by a stray bullet Jenkins passed away a few days ago from her injures.

"It was really hard to explain to her. Of course she was asking me, 'why.' She didn't understand why something like this would happen to her cousin," said Bishop.

At the prayer walk Saturday, Bishop's daughter held a sign for "Lay Lay."

The walk happens on the anniversary of another little girl caught in between gunfire. Two years ago to the day, Sierra Guyton was shot on her school's playground. She died from her injuries.

"Today is day of fellowship, taking a stand against violence, and the whole world united as one," said Tracey Dent.

Dent is one of the organizers of the walk. He knows ending violence is a long way away, but says it's easy to take the first steps.

"We need to start getting to know each other. Those are the things, the basic things that we can do as people just to start reducing some of the violence in our neighborhoods," said Dent.