LA CROSSE, Wis. (CBS 58) -- On his Labor Day visit, Vice President Mike Pence touted the Trump administration’s economic record in an effort to solidify support in a region of the state that will be critical to the president’s efforts to attempt to win a second term in office.

“The American comeback is on!” Pence told a crowd at Dairyland Power Cooperative.

While the issues of law enforcement and race relations took center stage in Kenosha last week with visits from President Donald Trump and former Vice President Joe Biden, political experts believe bread and butter issues like the economy and the recovery from the pandemic will rise to the top as what will end up swaying voters and determine the election.

“We’re never going to stop fighting for working people all across Wisconsin and all across this country until we bring this state and this nation back bigger and better than ever before,” Pence said.

The national unemployment rate sits at 8.4 percent according to the latest jobs report from Aug. 4. Department of Labor Secretary Eugene Scalia, who traveled with Pence to Wisconsin, concedes the economy has a long way to go to return to pre-pandemic numbers, but that the data supports the idea that a ‘V-shaped’ recovery is underway.

“That number is high, higher than we want it, we need to bring it down but let me tell you what an achievement it is to get it down to just 8.4 percent just four months into the pandemic,” Scalia said. 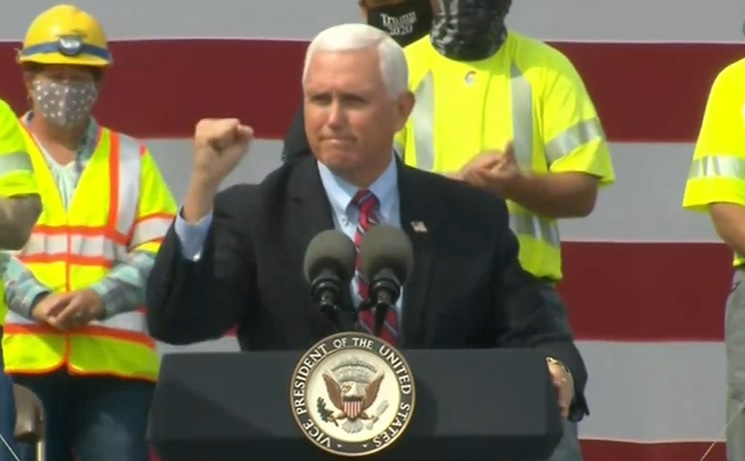 The VP’s visit came on the same day as his democratic counterpart, Kamala Harris, visited Milwaukee for two stops that also focused on economic issues.

Pence took a swipe at Harris’ voting against the USMCA citing her opposition due to environmental concerns. The vice president aimed to appeal to dairy farmers in the state saying the economic deal would benefit them. But Pence also continued the campaign’s drumming up of the issues around policing and race relations in the country with the Trump administration’s framing of the topic as about law and order.

It follows visits from both Trump and Biden to Kenosha following the shooting of Jacob Blake and the unrest that followed.

“There is no excuse for the rioting and the looting that we have seen in Kenosha,” Pence said. “This violence against civilians, against property and against law enforcement must stop and it must stop now.”

This is Pence’s sixth visit to Wisconsin in 2020. The next time he and Harris are likely to be in the same state on the same day will be in one month when the two square off in their one and only vice presidential debate in Salt Lake City, Ut. on Oct. 7.
------

Happy #LaborDay, America! Heading to Wisconsin with @SecGeneScalia to visit the hardworking men and women of @DairylandPower as our Administration continues to stand for the American worker! ?? pic.twitter.com/nqfg6bJJ3L

Analysts say Labor Day visits from both VP candidates will have them hitting the ground running.

"Tradition in Wisconsin is very much the political season starts on Labor Day," University of Wisconsin-Milwaukee Professor Mordecai Lee said.