Veterans fight back after Greendale School Board rejects memorial proposal 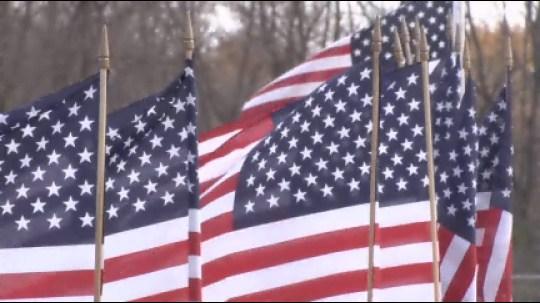 Local veterans are not happy with the Greendale school board after the board rejected their proposal for a new veterans memorial. Now, residents who didn't agree with the board's decision have gone ahead and constructed a memorial of their own. Veteran Tim Baranzyk loves being surrounded by red white and blue, but rows of stars and stripes aren't what he expected to be on the corner of Broad Street and Southway.

\"I pray that a memorial will go up,\" said Baranzyk. He, along with other Greendale veterans, have been lobbying for a veterans memorial. He's asking for to use some land that currently sits vacant.

\"This project would not cost the taxpayers anything. Now I'm starting to sound like I'm running for public office. This is all done by private donations,\" said Baranzyk.

The property belongs to the Greendale School District. The school board voted against the proposal in a 3-2 vote earlier this month.

\"I'm not ticked off. I'm just frustrated and disillusioned by this whole process,\" said Baranzyk.

The school board president says they voted against the memorial on their property because its a safety issue. It is a busy intersection and there is no parking available. He said he is against the location, not the memorial.

Some weren't satisfied with the vote. Hundreds of American flags have been placed in the same spot where the memorial would have gone.

CBS 58 has learned the school board will not remove the flags from that location. The next school board meeting is on November 3rd. A school board member would have to make a motion for the board to reconsider their decision. Right now, there is no talk of that happening.