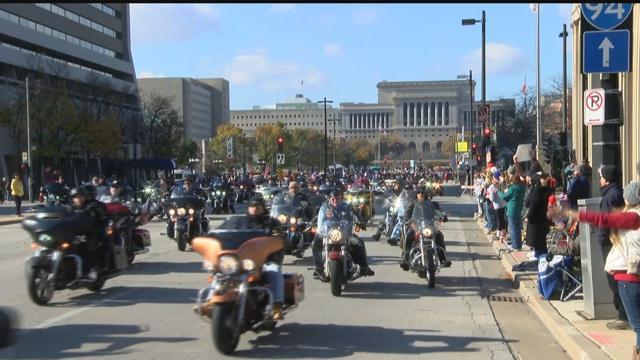 Veterans Day is coming up this Wednesday but the city of Milwaukee is already celebrating.

Of course you had your usual rolling groups of motorcycles and politicians or guests of honor riding in classic cars.

But if you want to talk about a serious vehicle restoration project look no further than the tiny cart driven by Vietnam Veteran Arthur Froh.

It's a '67 Military Mule which also spent some time in Vietnam. It's small and platform-like. Only recently did Froh get it running again.

"And I was just smiling so much I was so happy that finally after all that money I stuck into it, it ran," Froh said.

John Capin is another member of the Milwaukee's chapter of the Association of the U.S. Army. He spoke with interested passersby who inspected their fleet of refurbished vehicles.

"They had 'em set up for medics where they could take three casualties or wounded and take 'em to the rear," Capin said of the Mule.

"They were the only vehicle in the military's arsenal where the payload weighed more than the vehicle itself," Capin added.

Its a passion for history preservation and advocacy for veterans that keeps the group going, Capin said.

The main parade sponsor - TransCanada Corporation - has taken a similar stance for this event.

"We received a call from one of my technicians who saw on the local news that the parade was in jeopardy of being canceled," Wisconsin area manager Matthew Stubbs said.

"He contacted me and I contacted our corporate community specialist. And we were able to come up with the three year funding program to support the parade for three years," Stubbs said.

The company is now in year two of its plan. Stubbs said they are on track to set up a legacy fund to make sure the parade always has the money it needs.

On the Mule - the very same type of Vehicle he drove in Vietnam - Froh said he's thankful for events like these.

He was just 19-years-old when he was drafted and even now it affects him, Froh said.

"I look back at it and I think it wasn't so bad but when I get down to it, it really upsets me," Froh said.

"If it weren't for the people who show up here to the parade, it wouldn't be much of a parade," Capin said.

"So, a big thanks from us, the veterans, to the people who show up here to support us also," Capin said.