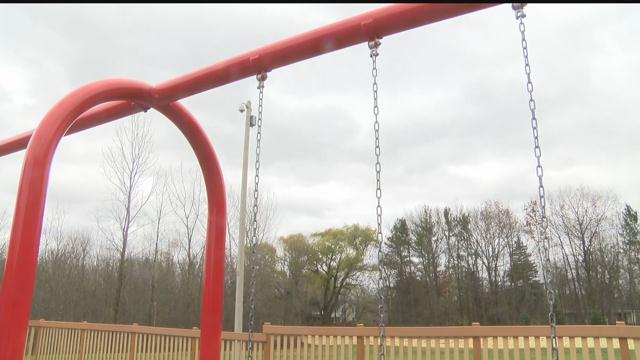 For the third time in less than three months a park in Franklin is targeted by vandals.

This time someone loosened the bolts on a swing-set at 'Kayla's Playground' - a park deliberately designed to be handicap-accessible.

This vandalism, which happened sometime before November 5, occurred just one day before the city installed security cameras at the request of Police.

The city was made aware of the vandalism after a five-year-old boy fell from a swing after it broke free. He was not injured.

Franklin police determined eight I-bolts on two swings were loosened on the swing set on the far end of the playground.

"We wanted to know why. I know a lot of people have asked why. Why would people do this. It's hard to say," Runte said.

Back in September she got the news the construction area had been vandalized for the first time. Someone had pushed over multiple Port-O-Johns, portable sinks, and temporary lighting equipment.

Then in October police investigated an explosion that happened nearby just before their ribbon cutting. Authorities discovered it was a homemade bottle bomb and the ribbon cutting went on without issue.

But the case involving the swing set is the latest part of the vandalism investigation centered at the park with a goal to be accessible to people in wheelchairs.

"And we've had overwhelming positive reports of family who've said thank you over and over and over. So that's what we focus on," Runte said.

"I have full confidence in the police department here in Franklin. They're doing everything in their power to find whoever did this," Runte said.

The park is now watched 24 hours a day by two camera in the front and rear of the playground.