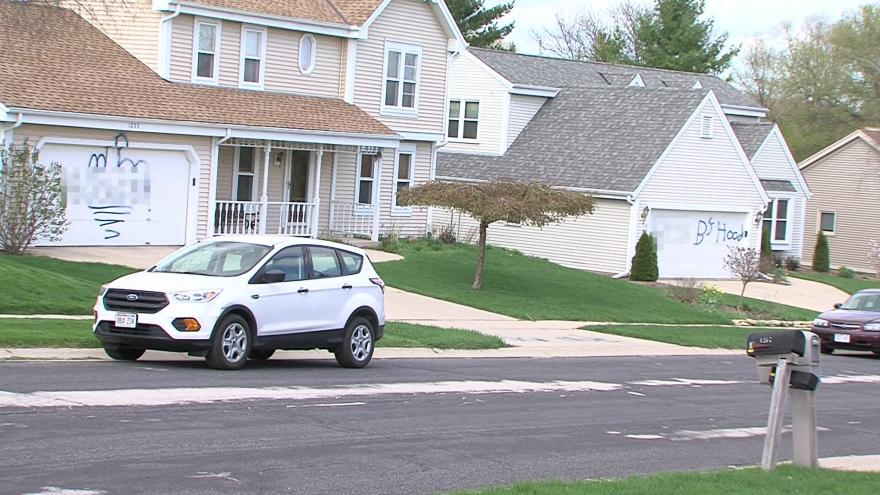 A rare crime in the Village of Mukwonago has an entire neighborhood in shock. Police say vandals struck in the early morning hours, leaving their mark of destruction for all to see.

"I had one of the police officers ring the doorbell and ask me to come outside," said Jeff Gawronski, the vandalism victim.

"I mean I was cussing but I'm not gonna do that on tv but, who would do this?" said Krista Wroblewski.

The quite neighborhood in Mukwonago was disturbed by vandals. Their graphic messages fueled with profanity, racial slurs, and vulgar images.

"It's just the way society is right now. There's a real big gap so we have to do some things but it starts with the family at home," said Jeff Gawronski.

Mukwonago Police say a dozen homes and even cars were hit by the vandals.

"These kids don't realize what this stuff costs. so now because they thought it was funny it could cost me $750. it's ridiculous," said Krista.

Sgt. Chris DeMotto says the village usually doesn't have these problems but now that it does, officers are working to find the culprits.

"We're following up with local businesses to see if they're selling spray paint," said Sgt. DeMotto.

"I don't know what he was thinking or what the group was thinking but I feel like they'll be prosecuted in time," said Jeff.

Some neighbors say they're now considering adding security to their homes.

If you have any information to help solve the crime, you're asked to call the Mukwonago Police Department.