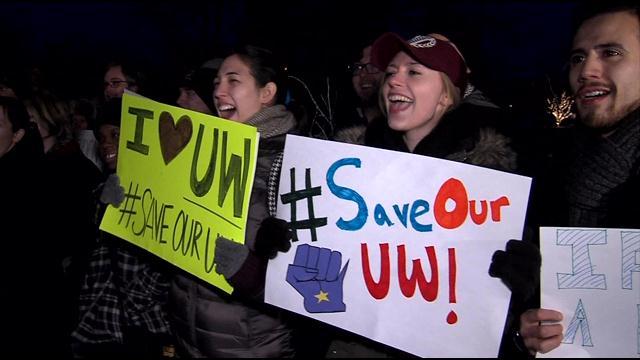 More than a hundred UW Milwaukee students marched against a $300 Million cut for the University of Wisconsin system.

Jill Hoffman is a junior at UWM who helped organize the demonstration.

\"I didn't know how large it was going to grow,\" said Hoffman, \"but I knew, I couldn't sit around and do nothing about these devastating cuts.\"

Like many students, Hoffman is concerned the cuts will affect programs at the university and ultimately raise tuition once the freeze ends in two years.  She fears a scenario much like what happened in 2012, when UW Madison saw a nearly 8%  hike and UW Milwaukee saw a 5.5% increase.

\"I shouldn't have to worry about my education, and becoming the change maker that I know I can be and that I know I need to be, because of the proposed cut,\" said Hoffman.

\"As a father of a UW student, I certainly care a lot about the system, not just as a governor, but as a parent as well,\" said Gov. Scott Walker (R-Wisconsin).

\"If we give long term, the University of Wisconsin, the freedoms that are inherent in the authority, much like the UW hospital and clinics we will see that same sort of success in the coming years,\" said Gov. Walker.

\"There's so many of us here who are paying out of pocket, that you know, working multiple jobs, taking 18 credits,\" said Charlie Shanaver, a student with UWM College Democrats.

They say the budget shouldn't come at the cost of college students who will ultimately contribute to the state's work force.

\"UW System is an economy booster, it is essential to Wisconsin's economy,\" said Hoffman.