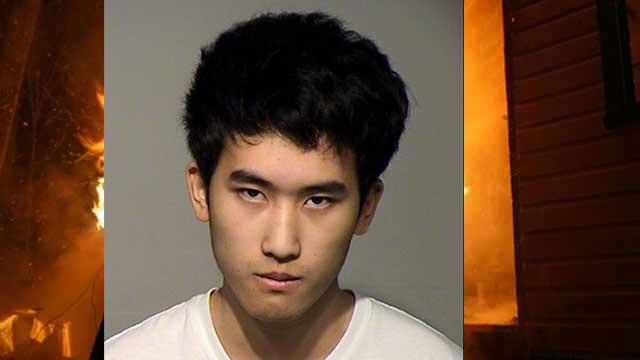 A Milwaukee man was charged Tuesday with arson in connection with a January 5 fire in the Engineering and Mathematical Sciences building on the UW-Milwaukee campus.

Zhexuan Zhou, a sophomore at UWM, was arrested late Friday after UWM police received a tip about a suspicious person.

The preliminary estimate for cleanup and restoration in EMS is $300,000 to $500,000, including rebuilding a classroom and cleaning and restoring smoke damage on each of the building’s 13 floors.

On 7:40 PM on January 5, UWM police responded to a report of smoke on the first floor of the engineering building. The officers located the source of the smoke in a first floor classroom and activated the building’s fire alarm. The Milwaukee Fire Department responded and extinguished the small fire, but not before smoke traveled throughout the building.

Because the fire occurred late in the day during UWM’s winter break, few people were in the building and all were safely evacuated.

Responders determined the fire was suspicious, and the UWM Police Department contacted the Wisconsin Department of Justice – Division of Criminal Investigation – State Fire Marshal’s Office. The state fire marshal conducted an investigation on Jan. 6 and concluded the fire was an act of arson.

On Friday morning, January  8, UWM Facilities staff were provided instruction on looking out for suspicious activity connected to the Jan. 5 fire.  Later that day, a UWM custodian notified police about a suspicious individual in the Lubar School of Business building. Police found Zhou and took him into custody.

“We appreciate Facilities’ assistance and the custodian’s alert response,” UWM Police Chief Joseph LeMire said. “Her prompt notification of the police contributed to the arrest of this suspect and may have prevented further criminal behavior and damage to our buildings.”