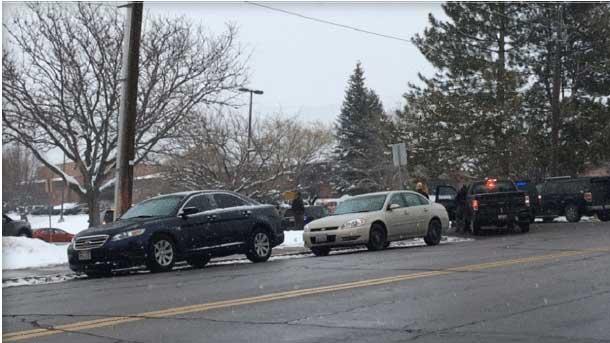 BOUNTIFUL, Utah (CBS NEWS) -- Police said two fast-acting Utah parents disarmed their 15-year-old son in the hallway of a Utah junior high school Thursday after the teenager brought the family’s shotgun and handgun to school, discharging at least one round without injuring anyone.

Bountiful Police Chief Tom Ross said the boy’s mother and father became concerned about their son Thursday morning. They went to Mueller Park Junior High in the northern Utah city of Bountiful when they noticed a handgun and shotgun were missing from their home. Ross said the parents confronted their son in a school hallway and disarmed him.

Police were still trying to learn whether the student intentionally fired the gun or if the weapon went off accidentally while the parents intervened.

Ross said he’s “extremely grateful for the parents for their involvement and the fact that this ended without any loss of life.”

Police did not immediately release the student’s identity. Ross would only say that the student was a 15-year-old white male.

Ross did not immediately have details about whether anyone else was around when the incident occurred but he says students were in classes nearby. Ross did not know whether a gun fired more than once or how the parents disarmed their son or their specific concerns about him. Ross did not know why the student brought the weapons to the school or what he intended.

Police had not been contacted before about the boy, Ross said.

As the parents intervened, a teacher called 911 and a police officer who happened to be down the street arrived and took custody of the student soon after, police said.

Williams had no immediate information about the student or whether the student had any history of trouble or incidents at the school, but, “Whoever it is certainly faces a lot of trouble.”

Ross said the student’s parents remained “with their son through the process.”

The school, about 11 miles north of Salt Lake City, remained on lockdown as more than 100 officers went room-by-room through the building to ensure it was safe. Police found a backpack in the hallway and wanted to ensure it did not contain any explosives, Ross said. It was unclear if the backpack belonged to the student.

Ross said no other student appears to have been involved.

Candy Beckstead said she was at a dentist’s office when her sister called to tell her that there was something going on at her son’s school.

She didn’t hear from her 8th-grade son but rushed to the school.

“I freaked out and went into panic mode,” she said. “Screaming, crying.”

The incident comes about two weeks after another Utah student stabbed five random high school classmates and himself before he was cornered by school workers, according to police.

The victims and the 16-year-old suspect survived the wounds. The teen has been charged with five counts of attempted murder in connection with the Nov. 15 rampage at a school in Orem, about 50 miles south of Mueller Park Junior High.

Police also arrested a teenager in late October after he shot an older boy twice in the head in a fight over a girl near another Utah middle school. Charges against the 14-year-old include attempted murder and weapons violations.

The Associated Press is not naming the boys because it does not normally name juvenile defendants.