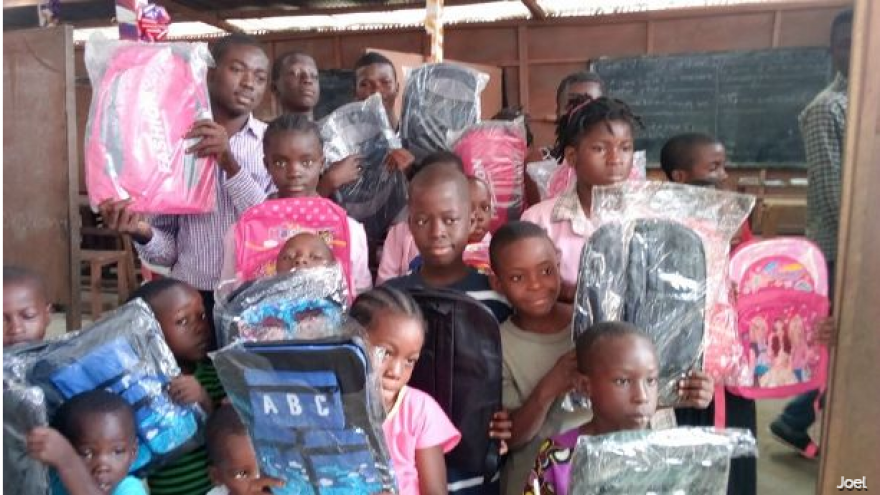 “Helo Sir, wel my name is Joel from Liberia, West Africa. Pls I beg u in name of GOD, I need some assistance from u, business or financial assistance dat will help empower me pls,” the message read.

While Taylor’s common sense told him it would be best to ignore the poorly spelled plea for financial help from a man in Africa, he hadn’t let that stop him in the past. He would often try to waste scammers’ time by responding to their messages, even documenting some of the antics on his YouTube channel. So Taylor decided to bite and — like any good YouTuber — document it.

“How can I help?” he replied, curious to see what Joel had in mind.

Joel told him he was a journalist who taught an English class in Liberia, but he needed some financial help. Taylor asked him if he’d be interested in doing some photojournalism work and asked Joel to send him pictures of the sunset in his country using his phone, promising to wire him some money if he did so.

“I thought it was another one of those (scamming) cases, but he was asking me for money and I thought if I could give him work, provide a way for him to make money, I would do that,” Taylor told KSL. “It was really kind of a social experiment to see if he would be willing to do work in exchange for a little bit of money.”

And to Taylor’s surprise, he was.

But it quickly became clear photography wasn’t Joel’s strong suit, and the entrepreneur seemed set on pursuing a less integrous business venture that would require Taylor to send electronics to a man in New Jersey who could ship them to Liberia where Joel would sell them. He promised Taylor he’d send him his half of the proceeds afterward, though Taylor had a feeling he wouldn't see much of the profit.

Taylor decided to test the waters, even sending the New Jersey man a $2 radio transmitter, but ultimately persuaded Joel to return to their previous business venture and sent him a $30 camera to get started.

After some negotiating, Taylor told Joel he’d wire him $28 if he emailed him 20 pictures of life in Liberia. Joel would receive half the money to begin with and the rest upon completion. But Joel became angry, saying he would need it all up front so he wouldn’t have to wait in the long lines at the Western Union bank where he claimed the tellers offered preferential treatment to customers picking up more money.

Exceptionally skeptical of Joel’s story, Taylor told him he’d have to complete the job before receiving the full amount. A few days later, Joel was back, this time claiming his camera had been confiscated by police and requesting more money to get it back. Fed up with Joel's lies and his other dishonest claims, Taylor decided to give up and stopped messaging the would-be scammer.

“Joel has to be the worst photographer in the world,” Taylor said in one of his many YouTube videos documenting the experience.

But he had completed the task, so Taylor wired him the rest of the money, along with some free photography advice, teaching him how to frame and light a subject — and how to hold the camera steady.

Joel soon sent more photos, and Taylor was ecstatic to see the improved quality. But the photos of Joel’s impoverished village surprised him and his perspective began to shift.

Taylor had also begun receiving comments on his YouTube videos from people all over the world, some even from Liberia who confirmed Joel’s story of the long lines at the same Western Union he frequented, a story Taylor was sure Joel had completely fabricated.

“I initially thought he was trying to scam me, but now I have just come to see him as a guy who’s really looking for an opportunity to make some money,” Taylor said.

So he made it his mission to help.

With the help of professional photographers and graphic designers who had become fans of the YouTube series, Taylor created a book showcasing some of Joel’s best work, entitled “By D Grace of God” — a phrase Joel would often use in his messages to Taylor.

With the completed product, Taylor launched a campaign on Indiegogo to sell a few copies of Joel’s book, hoping to raise $2,500. By the end of the campaign, the book had raised over $13,000 and had been purchased by customers in more than 40 different countries.

“I started making YouTube videos about scammers because people thought it was funny to see me messing with them … but now that they see that Joel’s a real person with a heart and a desire to be honest and do good in the world, they’ve totally turned a corner and now they want to see Joel succeed and are rooting for him.”

Customers have been tweeting pictures of their book with the hashtag #bookofjoel, and the photos are rolling in from all over the world.

Taylor decided to take half the proceeds and pay Joel in increments of $500 — a sum Joel says is the average annual income of someone in Liberia. With his first payment, Joel was able to buy himself a computer, a new phone and wants to start his own business.

Taylor hoped to donate the other half to a charity in Liberia, but couldn’t find any he was comfortable with, so he asked Joel what he thought the needs of his village were.

So Taylor wired more money, and Joel went and “cleaned out” the local market, even renting a taxi to carry the notebooks and bags to the local schools and documenting it all with his camera.

And Taylor, himself, is surprised at the budding relationship with his would-be scammer, who he said sees Taylor as the answer to his prayers.

“He just comes off to me as a really genuine guy. He’s a person of faith who puts his faith in God that things will work out. He looks for the best in people," Taylor said. "I thought I would waste his time by giving him these menial tasks of taking pictures around his village, but it turns out that he was willing to put in the work. … He was really just a guy that was down on his luck and looking for work."

“When you give someone a chance, sometimes they’re not who you thought they were. Sometimes they surprise you, and sometimes you end up being the answer to their prayers.”

Taylor has documented the entire saga in a 16-episode YouTube series here. Those wishing to purchase a copy of "By D Grace of God" can buy it here.