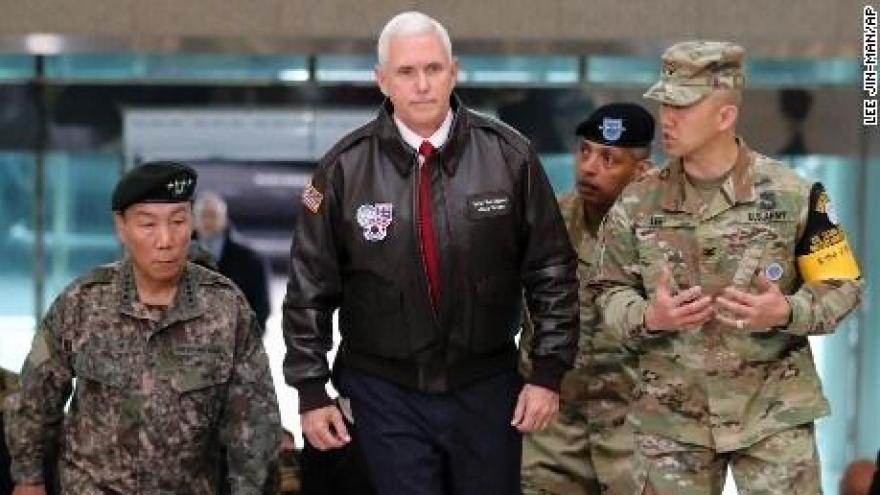 Seoul, South Korea (CNN)US Vice President Mike Pence visited the Korean demilitarized zone Monday, a day after the embarrassing failure of a North Korean missile test which the US and South Korea said exploded on launch.

Standing within 60 meters (200 feet) of the North Korean border, Pence described the DMZ as the "frontier of freedom" and added that "all options are on the table" in pursuing the denuclearization of the Korean Peninsula.

Tensions on the peninsula have ratcheted up in recent weeks, amid tit-for-tat saber-rattling from the US and North Korea and analysts' warnings that North Korea was preparing for another nuclear test.Speaking at the DMZ, Pence said the US "has always sought peace through strength and my message here today ... standing with courageous soldiers from the Republic of Korea is a message of resolve."The demilitarized zone (DMZ) is the highly-fortified de facto border between North and South Korea. It's four kilometers (2.5 miles) wide, stretches 250 kilometers (160 miles) and is dotted with military guard posts, mines and defensive structures.It was established by the 1953 armistice agreement which ended the Korean War, though both sides technically remain at conflict as no peace treaty has ever been signed.

At the Panmunjom Joint Security Area, which Pence visited Monday, North and South Korean soldiers stand watch feet away from each other, the only place where the two forces come face to face.

Blue huts straddle the border, where tense negotiations have been held between the North, South and the US since armistice.

On the North Korean side, soldiers often stand watch over each other, as well as their neighbors to the south, to guard against attempted defections.

Despite the dangers of crossing the landmine and barbed-wire strewn DMZ, several North Korean soldiers have defected in this way. The most recent incident was in September last year.Echoing the remarks of US Secretary of State Rex Tillerson on North Korea last month, Pence said the "era of strategic patience is over."

The US has leaned on China -- North Korea's main ally -- to apply pressure on Pyongyang to curtail its nuclear ambitions.

At the same it's increased its military footprint in the region by deploying a naval carrier strike group to waters off the Korean Peninsula.US President Donald Trump held a summit with Chinese President Xi Jinping earlier this month, and has praised China's turning back of North Korean coal ships as a "big step" forward in the effort to enlist Chinese pressure on Pyongyang.

Pence said Monday Trump was "very hopeful that China will take actions to bring about a change of policy in North Korea. An abandonment of its nuclear weapons program and its ballistic missile program."

Speaking Sunday, US national security adviser H. R. McMaster said that when it came to the North Korean nuclear program "all of our options are on the table, undergoing refinement and further development."

He emphasized the US hopes not to use military force but warned "this problem is coming to a head."

McMaster said various US military and intelligence agencies are working on providing options to "have them ready" for Trump "if this pattern of destabilizing behavior continues."

On Friday, North Korea said the dangerous security situation was due to the "Trump administration's reckless military provocation."

"The Trump administration, which made a surprise cruise guided missile strike at Syria on April 6, has entered the path of open threat and blackmail against (North Korea)," a spokesman for the Korean People's Army said according to state news agency KCNA.Pence's visit followed an impressive parade Saturday to mark the "Day of the Sun," the most important day in the North Korean calendar, when Pyongyang showed off an array of new missiles and launchers.

Pyongyang paraded two new intercontinental ballistic missile-sized canisters as well as displaying its submarine-launched ballistic missile and a land-based version of the same for the first time, according to analysts.

The regime followed that -- according to US and South Korean officials -- with an attempted missile test Sunday from the eastern port of Sinpo. That was the site of a ballistic missile test earlier this month in which the projectile fell into the Sea of Japan, also known as the East Sea.

If Sunday's missile launch leads to a nuclear test or an ICBM launch, there would be "a powerful punishing measure that North Korean authority can't endure," South Korean officials said.

US officials told CNN they did not believe the missile had intercontinental capabilities, and blew up almost immediately after launch.