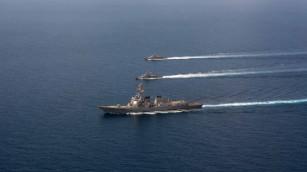 (CNN) Three US strikes hit radar sites in Yemen early Thursday, hours after missiles targeted a US warship in the Red Sea, the Pentagon said.

The strikes were carried out in "self defense," the Pentagon said.

They came after missiles targeted the USS Mason off the coast of Yemen on Sunday and again Wednesday -- but missed it and hit the water instead. Two missiles were launched within 60 minutes of each other on Sunday when the warship was in international waters.

The ship was fired on again Wednesday while conducting routine operations in international waters off the Red Sea coast of Yemen, according to the Pentagon.

The missiles were fired from Houthi-controlled territory in Yemen, according to Davis. The Houthis are a minority Shia group that has taken control of much of Yemen, including the capital.

Houthi rebels denied that their forces targeted the US warship in both incidents.

"There was no damage to the ship or its crew. USS Mason will continue its operations."

The three sites targeted Thursday were in remote areas with little risk of civilian casualties or collateral damage, a US official said. All the sites are in Houthi-controlled territory.

The US has been at the center of headlines in Yemen in recent days. Washington backs a Saudi-led coalition fighting Houthi rebels to prevent them from taking power in the country.

Last week, the US said it was reevaluating its support after an airstrike blamed on the Saudi-led coalition killed at least 155 people at a funeral home in Sanaa.

"The United States, United Kingdom, and other governments should immediately suspend arms sales to Saudi Arabia."

The Saudi-led coalition said it is investigating reports that its warplanes were behind the airstrikes.

The coalition, which involves several Arab countries, started a military campaign in Yemen last year after Houthis drove out the US-backed government and took over Sanaa.

The crisis quickly escalated into a war that allowed al Qaeda and ISIS -- other enemies of the Houthis -- to thrive amid the chaos.

The conflict has killed about 10,000 Yemenis and left millions in need of aid, according to the United Nations.

Since peace talks in Kuwait failed in August, the coalition has intensified airstrikes despite criticism from rights groups that the attacks often hit civilian targets with devastating results.

The United States has come under increasing pressure to stop selling arms to Saudi Arabia.

The US Senate last month rejected a bipartisan proposal to block a pending $1.15 billion arms sale to Riyadh.

Critics of the military deal, which was approved by the Obama administration, complained it could further drag the US into the war in Yemen and contribute to the worsening humanitarian crisis.