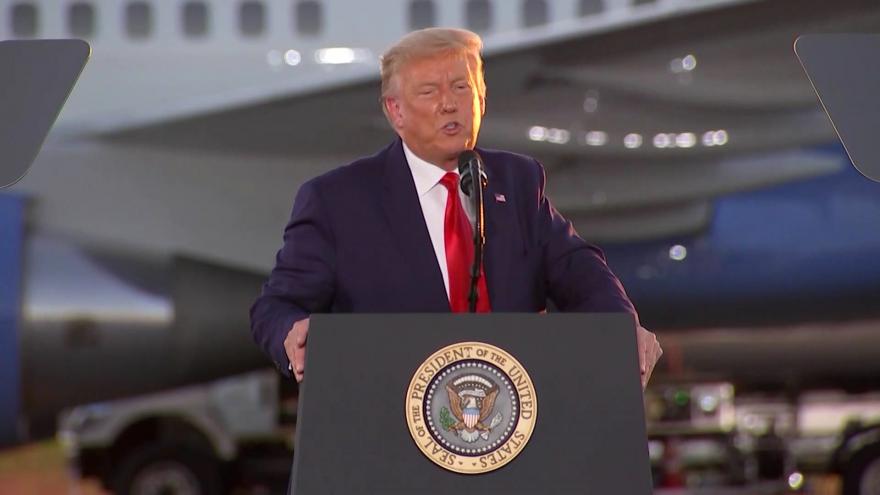 (CBSNews) - U.S. and European stock futures and Asian shares fell Friday after President Donald Trump said he and first lady Melania Trump had tested positive for the new coronavirus. The future contracts for both the S&P 500 and the Dow industrials briefly lost more than 2% but were down 1.4% as of 2:30 a.m. Eastern. Oil prices tumbled more than 3%.

Mr. Trump tweeted news of his test results just hours after the White House announced that senior aide Hope Hicks had come down with the virus after traveling with the president several times this week.

Tonight, @FLOTUS and I tested positive for COVID-19. We will begin our quarantine and recovery process immediately. We will get through this TOGETHER!

As too many Americans have done this year, @potus & I are quarantining at home after testing positive for COVID-19. We are feeling good & I have postponed all upcoming engagements. Please be sure you are staying safe & we will all get through this together.

"To say this potentially could be a big deal is an understatement," Rabobank said in a commentary. "Anyway, everything now takes a backseat to the latest incredible twist in this US election campaign."

Trading in Asia was thin, with markets in Shanghai and Hong Kong closed. The Nikkei 225 index shed strong early gains, losing 0.8% to 22,999.75 after the Tokyo Stock Exchange resumed trading following an all day outage due to a technical failure.

Reports that the Japanese government is preparing new stimulus measures to help the economy recover from a prolonged downturn worsened by the coronavirus pandemic provided only a temporary lift. Prices fell further after Trump's announcement.

Such big swings have become typical recently, as investors handicap the chances of a deal on Capitol Hill to send more cash to Americans, restore jobless benefits for laid-off workers and deliver assistance to airlines and other industries hit particularly hard by the pandemic.

House Speaker Nancy Pelosi and Treasury Secretary Steven Mnuchin continued their talks on Thursday, but no breakthrough arrived before stock trading ended on Wall Street. Instead, there were only hopes that were periodically raised and dashed as government officials took turns criticizing each other.

"Things remain fluid; we all know what is at stake if this deal does not go through before markets sundown, it is unlikely to be pretty ugly," Stephen Innes of Axi said in a commentary.

Beyond potential political developments, investors will be watching for job figures due out Friday. Data released Thursday painted a mixed picture for the economy, with one report showing the number of workers filing for unemployment benefits last week fell to 837,000 from 873,000. That was less than economists expected, but incredibly high compared with before the pandemic.

Consumer spending was higher than forecast in August, which is key because it's the main driver of the U.S. economy. But personal incomes weakened by more than expected last month, and growth in the country's manufacturing sector also fell short of forecasts.

With airlines and other major companies announcing layoffs and furloughs, another round of economic aid from Congress is seen as crucial. Treasury Secretary Stephen Mnuchin and House Speaker Nancy Pelosi have worked effectively together in the past, helping to drive through the previous economic rescue approved by Congress in March. But the country's deepening partisan divide has stymied progress, with the presidential election only about a month away.