US Soccer Says Players Must Stand During National Anthem 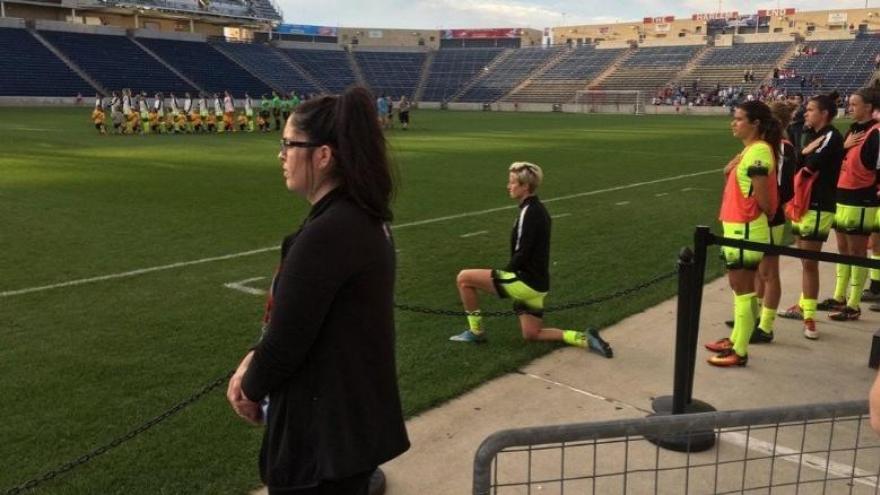 (AP) — The U.S. Soccer Federation has adopted a policy that says national team players "shall stand respectfully" during national anthems.

The policy was approved last month but came to light Saturday before the U.S. women's national team lost to England in a SheBelieves Cup match. A Fox Soccer analyst posted an image of the rule on Twitter.

The policy comes after midfielder Megan Rapinoe knelt during the anthem at a pair of national team matches last year. Rapinoe has said she wanted to express solidarity with San Francisco 49ers quarterback Colin Kaepernick, who knelt last season in an attempt to bring attention to racial inequality.

Rapinoe was not on the roster for the national team for the SheBelieves Cup tournament while she continues to regain her form after knee surgery. She also knelt last year during a game with the Seattle Reign, her National Women's Soccer League team.

Policy 604-1 states: "All persons representing a Federation national team shall stand respectfully during the playing of national anthems at any event in which the Federation is represented."

U.S. Soccer's Board of Directors passed it on Feb. 9.

Following the 1-0 loss to England at Red Bull Arena on Saturday, U.S. coach Jill Ellis was asked about the policy.

"I've always felt that that should be what we do to honor the country and have the pride of putting on a national team jersey. I said that previously, I think that should be the expectation. That's our workplace out there and we should represent ourselves and our country," Ellis said.

It is unclear what action would be taken if players did not follow the rule.

Rapinoe was in San Francisco on Saturday for a youth training clinic and did not immediately respond to a request for comment.