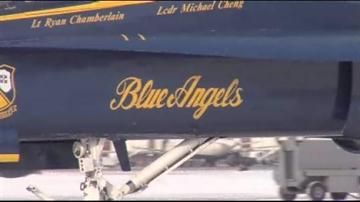 MILWAUKEE -- The Milwaukee Air and Water Show is preparing to wow the community once again with its high-flying stunts over Lake Michigan.

This year, the U.S. Navy Blue Angels are making a much-anticipated return. The team's last performance in Milwaukee was in 2010.

A number of eye-opening maneuvers are performed during their spectacular demonstrations.

Pilots must have thousands of traning hours to fly the jets. Then, there are about 120 practice runs before they kick off their season tour.

The Blue Angels will be joined by a number of new performers at the 2014 air and water show, including a U.S. Navy leap frog parachute team and a wing walking team.

Each year, organizers work with a number of law enforcement and saftey agencies in case of an emergency.

He said the recent death of a pilot at the Stevens Point air show hits home and the team does everything it can to prevent such tragedies.

\"Every show site we go to is unique and different,\" said Lt. Mark Tedrow. \"We have to find visual checkpoints and the obstacles around the show site so we can put on a safe demonstration so we know what to avoid and what not to avoid.\"

There is expanded seating near McKinley Beach for those who want a closer look of the show, but that costs a small fee.

Otherwise, it's free to keep an eye to the sky from Bradford Beach.

You can find ticket and line-up information at www.milwaukeeairshow.com.