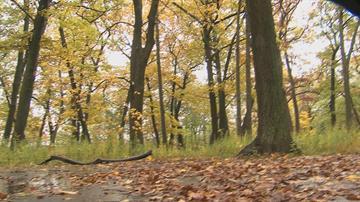 Milwaukee is home to an amazing arboretum that is attracting attention from all over.

\"The greatest thing about it is that it's in the middle of the city,\" said Milwaukee Rotary Centennial Aorboretum project coordinator Aaron Zeleske. \"You get down by the river and you could be anywhere.\"

It's perhaps a little easier to find Mother Nature in an urban setting than you might think. You just have to know where to look. Along the banks of the Milwaukee River, you'll find the Milwaukee Rotary Centennial Arboretum; which is home to about six-acres of natural relaxation that starts at Riverside Park and expands south. And it's available to you 365 days a year.

\"It's a great resource that a lot of people don't think of,\" said Zeleske. \"Probably because it was so polluted for so long until, you know, the last 15 years. It's really had a rennaissance.\"

If it sounds like Zeleske is bragging about the work done there, it's for a good reason. Restoring and reclaiming the natural beauty of the area was a major undertaking. It's an effort that took many years to get started and plenty more dollars, which the Rotary Club of Milwaukee helped find.

By gathering up 400-thousand dollars of seed money and coordinating ten separate entities--who owned property associated with the land involved--it's fair to say that the journey to this point wasn't always smooth sailing.

\"It's been a labor of love through a lot of twists and turns,\" said Milwaukee Rotary Arboretum Task Force chairman Dan Davis. \"It's been three and a half years. And we just opened up to the public last month. And we're very happy about it.\"

Davis likes to point to another success, beyond the beautification efforts to the area he lives close to. Crime has steadily dropped by dramatic proportions year after year in Riverside Park, as more time and attention are invested into the area.

\"Crime is gone, for the most part,\" said Davis. \"And it's become a great place to come and spend with your family. Or your dog.\"

Both men have a favorite spot they like to visit. Zeleske enjoys admiring a specific tree in the Riverside Park portion of the Arboretum.

\"It's still standing, but hollow inside and there's a hole,\" Zeleske described. \"There's like a cave inside that you can go into. It's just a really cool tree.

Davis has a certain hill in mind that you might want to check out as well.

\"There's a circle of stones up there that you can sit on,\" Davis told CBS 58. \"And it's one of the best places, I think, in the city to see the sunset. Or the sunrise, for that matter, without having your feet on a concrete floor.\"

The impact and scope of this project stretches well beyond the boundaries of our fair city.

\"People across the country, and across the world, are catching wind of what we're doing here,\" said Zeleske. \"And this is a Milwaukee idea that started here. And other people are starting to catch on too.\"

The Milwaukee Rotary Centennial Arboretum is yet another feature of the city that's making Milwaukee great.

The Arboretum offers a great many opportunities to enjoy nature, including memberships and equipment to check out. That includes canoes, snow shoes and a variety of other options for little to no cost. You can find more information about that here.