UPDATED: One Person Dead After Apartment Fire in Sheboygan 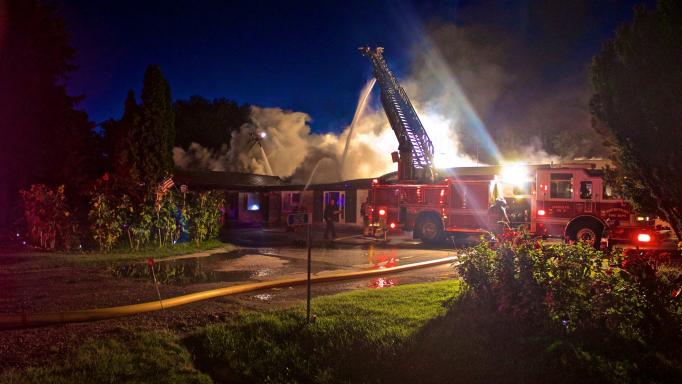 The Sheboygan Fire Department says one person is dead and over forty are out of their home after an early morning fire in Sheboygan.

The Embers Apartment complex with over forty units on South Business Drive caught fire after 4 a.m. The person that died was living in the unit where the fire started. The building was converted from a motel to apartments. All the units are efficiencies.

The American Red Cross is operating a shelter for those displaced in the fire.

Volunteers are providing meals and snacks for affected residents, and many will be staying the night at the shelter.

Police were first to get to the scene.

"There's a pounding on my door, and it's a police officer telling my I, 'have to get out because there's a fire,'" said Dirksen.

Dirksen said the first thing she grabbed was her cat. She is living in a neighbor's truck until she finds a place to house it.

The American Red Cross has provided supplies for the animal, but Dirksen says her cat is still very stressed, and she is too.

"I can't believe yesterday I had a place to live, and today I don't have a place to live. You can't put that into words. There's no words to describe that feeling," said Dirksen

The Sheboygan Fire Department says the building is likely a total loss, and the residents will be displaced. The State Fire Marshall is investigation the cause of the fire.

Dirksen is staying the night at the Red Cross shelter.

A fellow resident, Leonard Zimmer is also staying at the shelter. He lived at the Embers Apartments for 21 years.

While many residents were woken up by authorities, Zimmer woke up to the fire and called 911.

"I woke up and I heard explosion, and then I opened my door and I could see just flames shooting out," said Zimmer.

His apartment was so close to where the fire started, he was told there's nothing left.

Zimmer ran outside with nothing. In fact, the shirt he's wearing was given to him by a neighbor. He is worried he will never find his wallet, and his medications are gone.

The two are trying to stay positive. Dirksen says she will rely on faith.

"Pray, pray, pray, and hope I find a place to live," said Dirksen.