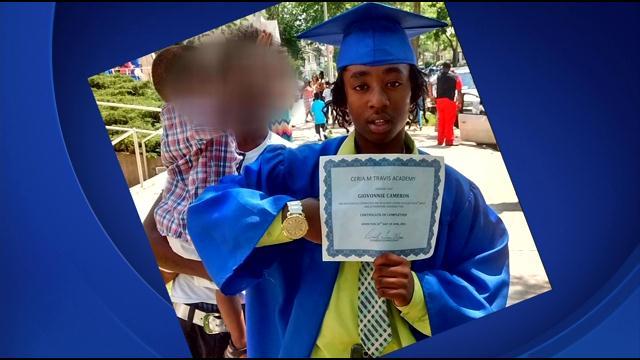 Milwaukee police are investigating a homicide on the city's north side.  It happened around 12:35 a.m. Wednesday at 22nd and Eggert Place.  The victim is a 13-year-old boy.

CBS 58 spoke to the family, they said the 13 year old was shot and killed by his cousin.
Giovonie Cameron was just 13 years old.
The family said his cousin Jason shot him inside the house.
They don't know what led up to the shooting, whether they were playing with the weapon or how he got the gun.
They said the two were very close friends and are asking Jason to turn himself in, and that they still love him.
\"He killed his big cousin and he has to live with that, I hope you still living and didn't do anything to himself, Jason Cameron whatever you're at nephew make it easy on yourself we just need some answers,\" said Joy Cameron, the victim's aunt.
This is the 83rd known homicide in the City of Milwaukee so far this year, and the youngest victim of 2015.
At a vigil attended by family and friends Wednesday evening, Giovanie's mother collapsed. Paramedics were called in to help her.
Share this article: