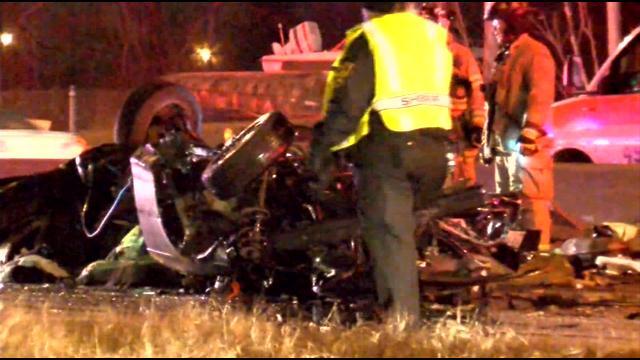 We have new information on a deadly crash on I-94 that killed one person and injured two others. Milwaukee County Sheriffs deputies say 32-year-old Marcos M. Cortez died in that crash. They're still investigating what caused him to get on the interstate and drive the wrong way. .

\"I heard a big, like, boom, like something exploded so I came out here to see what it was and all you heard was people screaming \"Don't touch him, don't touch him,\" said KDee Hoffmann, who lives right near where the crash happened. Hoffmann says she couldn't believe what she saw right outside of her home, which overlooks I-94 near Hawley Road.

\"There was a car smashed into a pole, there was another car pinned against the median, a car that looked like it got ran over by a tank,\" said Hoffmann when describing the scene.

They say around eight last night Cortez  drove his car, with it's headlights off, up the Mitchell exit ramp and drove the wrong way down I-94 East. Cortez's vehicle hit another head on. Four other cars were also involved in crashes related to this one.

\"Luckily, I-94 west-bound was pretty clear and there was an ambulance a half mile down. When they got here they flicked on their lights and stayed,\" said Hoffmann.

When Milwaukee Fire saw how many cars were involved they expected a long night.

\"It's a matter of first an officer making a determination as to how many patients are injured, what kind of injuries they have, almost like a triage,\" said Lt. Scott Lassa, with MFD.

And they got one. The eastbound freeway was closed between the 60th and 70th street exits for more than four hours.

Cortez died at the scene  and two other people were sent to the hospital with minor injuries. Deputies tell us they suspect alcohol was a factor in the crash but are waiting to hear from the medical examiner's office.