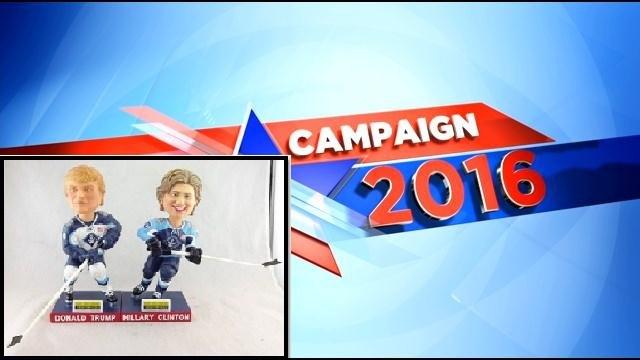 UPDATE: Donald Trump won the Admirals bobblehead poll by 37 votes (or bobbleheads). According to a tweet from the Admirals it was the closest the vote has come since they started doing it in 2008.

In Decision 2016 presented @wispolitics, by just 27 votes, er, bobbleheads, Trump is the winner in the closest Ads Straw Poll in history! pic.twitter.com/70wDgBpLia

The Milwaukee Admirals will conduct a straw poll of the presidential election by means of bobblehead done in partnership with WisPolitics.com's Decision 2016.

Saturday, November 5 when the Admirals host the Iowa Wild at 6:00 PM at the UW-Milwaukee Panther Arena the team will take a straw poll of their fans. The team will give out 5,000 bobbleheads, 2,500 each of Hillary Clinton and Donald Trump. When a fan comes through the gate, they will be asked to choose which candidate’s bobblehead they want to receive and the candidate who runs out first will be declared the winner.

“We have done used these polls in past and while the methodology is a bit unorthodox, we feel that these can be effective in garnering snapshot of this important swing state very close to election day,” said Admirals President Jon Greenberg. “As a president myself, I encourage our fans, no matter their political persuasion, to engage in the democratic process by supporting Admirals hockey. “

This will be the fourth straw poll that the Admirals have conducted, and the second via bobblehead. The team started the tradition with the presidential election in 2008, then continued it for the Wisconsin Gubernatorial contest in 2010 and did it again for the 2012 presidential contest.