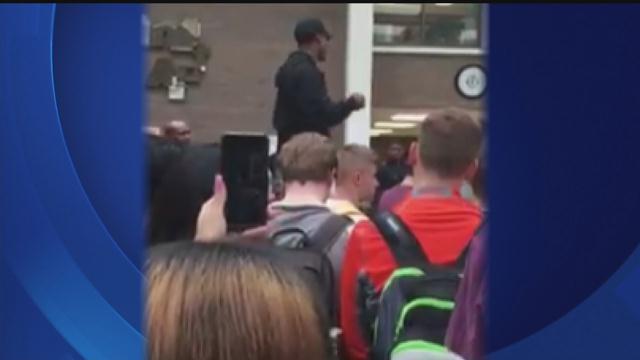 Students at Wauwatosa West High School say the Principal made inappropriate racial comments in the classroom. The Principal apologized on Monday, but students say that's not good enough.

The students want the principal to show his apology through action, because they say it’s not the first time this has happened.

Thomas Leonard says he sits in the back of his class because he feels comfortable. But after the high school principal called him out, the senior at Wauwatosa West is standing up, “the head administrator of our school walked into my science classroom and said, ‘it’s not the 1960's anymore black people don't have to sit in the back of the class.’”

After the incident Leonard organized a sit in at Wauwatosa West's cafeteria.

“I felt embarrassed in front of my classmates and I was disgusted,” said Leonard.

Students say Principal Frank Colarco apologized over the intercom at Wauwatosa West and said it was a joke.

But Leonard claims since this happened he's gotten calls from others who say they've heard the principal say things like this before.

“It wasn’t something a principal should say to a student especially in a classroom,” said Jonathon Jasinski.

Superintendent Phil Ertl said, "I’m sorry" multiple times in a statement and says the comments moved the District away from their goal of creating a safe inviting environment for all students.

“I think the principal needs to have some conversations with his student body, with his educators, and with his parents. Some of those conversations haven’t happened to the degree and he has recognized that,” said Representative David Bowen.

Students say they aren't interested in Principal Calarco being fired. They along with Representative Bowen just want to make it clear to everyone that those comments aren't okay.

“If the head of our school feels comfortable enough to say that in a classroom in a school where he works imagine what is said in this community or when he is home alone,” said Leonard.

On Monday there was a private meeting between students and faculty members. They were given a chance to share any other racially inappropriate incidents they’ve experienced. Those concerns will then be given to administrators who will decide what to do next.

Below is the full statement released by Superintendent Phil Ertl:

Last week, Frank Calarco, principal of Wauwatosa West High School, made a racial comment to a class of students. The statement, while not intending to be harmful, was insensitive and inappropriate. Mr. Calarco apologized to students on Friday and again today. This morning I joined some other district staff, including the district’s Supervisor of Equity and Student Services, to listen to students who are understandably upset about this situation.

In the Wauwatosa Schools, we have gone to great lengths to address issues of race and ethnicity in a thoughtful and straightforward manner and to open dialogue about race. It is clear that much work remains.

Just as Principal Calarco has apologized, I, too, want to offer students and families my heartfelt apology for this situation. As a school district, our focus is on creating a safe and inviting school environment for all students. These comments moved us away from
that goal.

I am very sorry.

In the short term, I welcome any student, parent or community member who would like to discuss this matter to contact me directly. I want to ensure that you are heard, and I want the opportunity to apologize to you directly.

In the longer-term, I believe that we must continue to make sure all students feel like our schools belong to each and every one of them. I am committed to making sure the Wauwatosa School District is the best place for all students to learn.

Again, on behalf of the Wauwatosa Schools, I am very sorry for this situation.