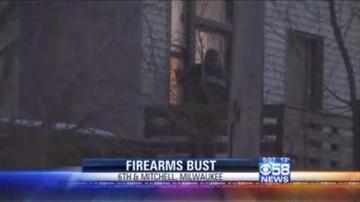 MILWAUKEE -- Milwaukee police executed a search warrant at S. 6th St. and Mitchell St. during the morning hours of January 15th. According to witnesses, an armored police vehicle and squad cars appeared near 6th and Mitchell around 6:00 a.m.

Police shut down traffic near the location they were searching.

A source in law enforcement tells CBS 58 News that police were pursuing known felons who were possibly armed.

Officers founds several firearms and a small amount of drugs. Three adults were taken into custody.