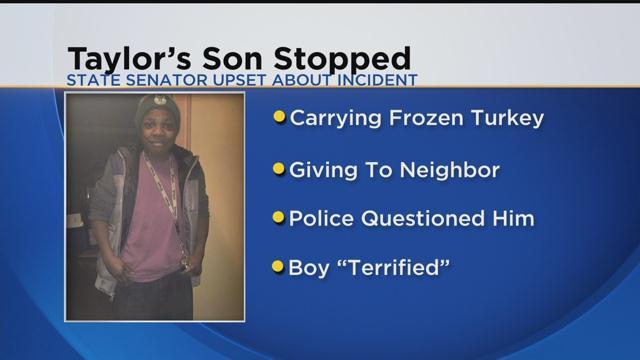 State Senator Lena Taylor said she was angry about an encounter between her 16-year-old son and the Milwaukee Police Department.

"Glory be to God that my son was returned to me unharmed,” said Taylor.

Taylor said to CBS 58 News that her son was stopped by police on Milwaukee's North Side while he was carrying a frozen turkey that he was going to give to a neighbor.

Taylor said officers questioned him, looked into his bag and had him sit in the back of a squad car all the while saying he wasn't in trouble.

Taylor said her son was terrified during the incident and she was very angry about it.

RELATED LINK: Knowing Your Rights When Pulled Over

"My son is just an example of hundreds thousands of African-Americans and especially African-American men who have had to go through this issue.  It has become a rites of passage to be detained and illegally potentially held by MPD," said Taylor.

Senator Taylor said she plans to file a formal complaint with the Fire and Police Commission.