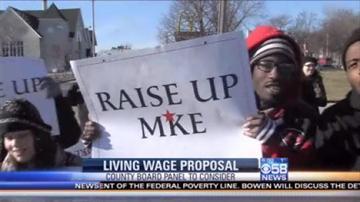 MILWAUKEE -- The fight for living wages presses on as Milwaukee County Supervisor David Bowen introduces a resolution that would require companies to pay its employees more.

The resolution would require companies that do business with the county to pay its employees an hourly wage at 110 percent of the Federal Poverty Line for a family as well as developers who receive Economic Development Financial Assistance over $1 million.

It was not passed by the Finance, Personnel and Audit Committee as hoped. Instead, discussion on the ordinance was delayed until the new year, possibly in February.