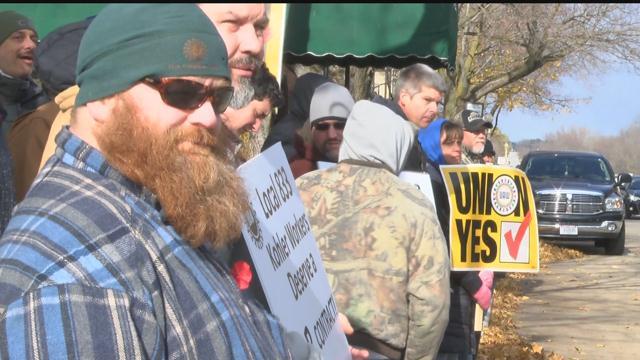 Update: Kohler employees are officially on strike after a 94 % no vote on the contract offer.

Employees at Kohler Company said Friday they are prepared to strike if they don't get a better contract offer.

It's been five years since employees got a wage increase and that's one aspect of what they want the company to agree to by Saturday at midnight, UAW Local 833 leaders said.

Employees already have started rallying outside of the main building. Throughout the day on Friday a handful of the 2,100 hundred members of union waved signs at passing cars.

Dale Rabe, an engine builder and steward for the union, talked about why he was supporting the demonstration.

"I've been working for Kohler for 24 years," Rabe said.

"Five years ago when we went through our last contract times were a little different. Times were tough. We agreed with the company to take a five year wage freeze and we did our part for the company that we were supposed to do," Rabe said.

Along with a wage increase, Jason Miller - who is on the union's executive board - said they would like the company to re-look at the way it pays its employees.

"Five years ago they introduced a Tier B system that only makes 65% of our wages. So for them it's a real hardship," Miller said.

"I mean, yeah, they need a job and they could go work somewhere else which a lot of people have actually done because if you have a family you can't raise them on $13 an hour," Miller said.

This is part of the latest statement from Kohler Co. coming from spokesperson Todd Weber: "We are committed to working collaboratively with UAW Local 833 leadership to negotiate a new labor agreement that is acceptable to union members while balancing the company's desire to re-invest in this site over the long term."

Friday's demonstrators argued the company should re-invest in its employees and said the improved economy would allow for it.

"Money has definitely benefited Kohler family and Kohler Company. And I think that it's time that they come back to the employees and pay the employees what they've worked for," Rabe said.

"This time i think people realize that if we don't put our foot down now there's going to be no end to this," Miller said.

Employees said they are not expecting a new contract to be agreed upon by this weekend and have planned a Sunday morning meeting to discuss what will happen next.