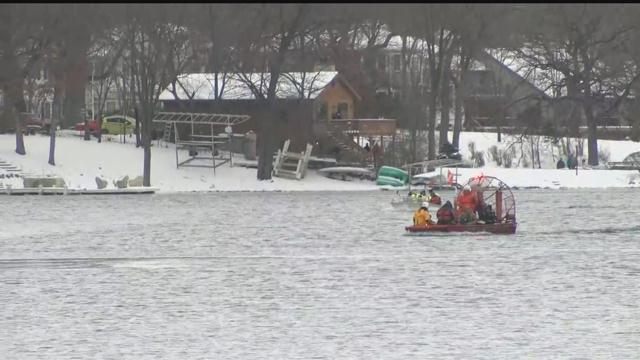 The bodies of 20-year-old Lanny Patrick Sack and 21-year-old Christopher McQuillen were recovered on Sunday.  All of the men are from Illinois.

The fourth man has yet to be identified.

The search for a fourth man continues today on the Walworth County lake near the city of East Troy.

Divers are expected to resume searching at 7:30 this morning for the body of a fourth Illinois man presumed drowned in a Walworth County lake.

Walworth County Sheriff Kurt Picknell said crews recovered the body around 3 p.m. less than 100 yards from where two other bodies were found on the Lake.

Authorities have released the names of the bodies recovered on Sunday. The two young men are from Illinois and have been identified as 20-year-old Lanny Patrick Sack and 21-year-old Christopher J. McQuillen.

The identity of the third body is being withheld at this time.

"Generally where the boats are working back and forth right there - that's the area of concentration and most interest," Sheriff Picknell said during a news conference.

DNR Warden Jason Roberts has been working with the crews on the lake for the past two days. All of the victims are expected to be between the ages of 20 and 23, he said.

The group was at a friend's parents house and had been drinking. Authorities say they don't know if the drinking played a contributing factor in their deaths. What they do know is the group was last seen at 2:30 a.m. on Sunday.

"The other people in the home in the morning found foot tracks from the house to the boathouse, found the canoe missing. They walked out to the water's edge and saw an overturned canoe out on the lake. At that point they contacted rescue people," Roberts said.

None of the recovered bodies were found wearing life jackets. Authorities have also been using sonar for a better look underwater.

"Hypothermia's difficult. A healthy individual, a healthy person - depending on your swimming skills or whether or not you have a life jacket on - really contributes to how long you can last in waters like this," Roberts said.

Multiple dive teams are now involved in the search including Waukesha County's as well as Racine county's. Sheriff Picknell said those teams are looking in water that's about 25 feet deep.

A third body has been found in Lake Beulah by Walworth County Sheriff's Office. The name is being withheld at this time.

Walworth County Sheriff's Office released the names of two individuals who have been recovered are identified as Lanny Patrick Sack age 20 and Christopher J McQuillen age 21.  All four individuals are from Illinois.  The search continues today for two additional missing individuals.

Search efforts are still underway for the bodies of two men.

The two 20-year-olds along with two other of their friends went missing after a late night canoe trip gone wrong.

The search is happening in Walworth county near Lake Beulah.

Multiple search agencies resumed their search at sunrise and so far no success.

Their efforts have focused on the south side of mill pond. That is part of the Lake Beulah chain.

A total of four men were reported missing yesterday morning.

According to investigators the friends were drinking and the 4 decided to put a canoe in the water.

At a around 8 yesterday, the rest of the friends woke up, and realized their friends were missing. They found the overturned canoe a short distance away.

Two of the men were found yesterday by search and rescue crews with sonar technology.

This morning rescue crews resumed the search. They said calmer winds and clear skies made the search easier.

But they said this is a stark reminder of how dangerous the water can be. Even in winter.

Crews will work until sundown.

The DNR tells CBS 58 they used sonar technology to recover two of the bodies around 8:00 PM.

Officials had been searching for the bodies by air and water since 11:00 AM Sunday morning.

Police say a group of about 12 friends from Illinois were drinking at one of their homes on Mill Lake and around 2:00 AM, four men age 20 to 23 decided to take a canoe out on the water.

“Essentially people walked out to the water’s edge, presumably got into a canoe, and at some point the canoe overturned,” officials said.

The other friends went to sleep not realizing their friends never came back, “they woke up this morning and noticed four people were missing, went outside and saw four foot tracks down to the boathouse, saw the overturned canoe and called police.”

But police say given the conditions they feared the worst, "obviously, the circumstances of the water temperature and the time they may have gone in the water precluded any rescue."

Nick Grunning has lived on the lake his whole life and says he knows better than to go into the water, which is normally frozen solid by now, “the water’s freezing cold. Going to take your body temp out of your body in a matter of minutes and then you're gone.”

DNR conservation warden Jason Roberts says alcohol was a factor but it's still not clear why these men went on the water, “weren't dressed like they were going out to paddle, were wearing casual clothes so what drove them to go out in conditions that I don't know.”

Meanwhile police have a word of advice: stay off the water in winter, “don't go near water in winter unless ice is frozen. Here's an instance where maybe tragedy could have been avoided.”

The DNR had divers in the water all day Sunday and said it’s taking so long because no one witnessed the accident. However, they did find marks, or areas where they believe the other two bodies are, but won't know for sure until they get crews out on Monday.