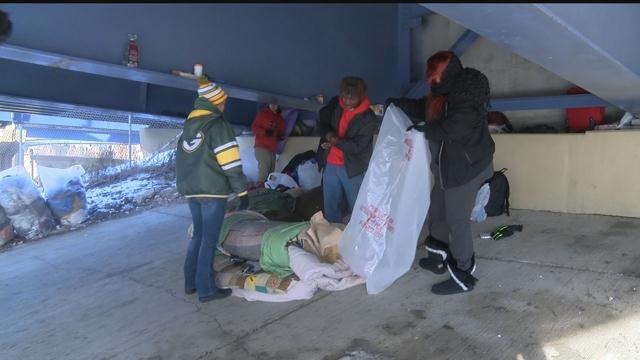 A local homeless camp was forced to move from under a downtown Milwaukee bridge Wednesday morning.

The property they were staying on is owned by the state.

"As far as living out here, it'll do. But this is nothing you don't wish on anybody," said Anthony Sanders, who’s been homeless for the past couple of years.

On Tuesday the two were given a hand written note by a county highway worker, it read: Highway department will be here tomorrow Wednesday morning to remove any items that are here.”

Shortly after 8 o'clock in the morning they arrived.

With no other options Sanders and Sparks called Angels Among Us, a local homeless advocacy group, who arrived earlier in the morning to flight on their behalf.

Angels among us founder Kristy Jackson says she understands county workers are just doing their job but she says she's frustrated because people with no home have nowhere else to go.

And with how cold temperatures have been recently many shelters are at capacity.

"This is their home. This is all that they have, “Jackson tried explaining to Milwaukee County Sheriff Deputies.

The officers reinforce that this land is state property.

With no other options, the group was forced into packing their belongings in to large bags and find somewhere else to go.

Removing the homeless is something that county workers say they don't want to do. They said they were actually told to clean up and remove the homeless Tuesday but gave them that note as a 24 hour notice.

Shortly after the CBS 58 News at 5 p.m. aired the story, the station received word from  James Mathy, Administrator of Milwaukee County Housing Division, about how a new housing first initiative might offer some help.

Launched in the summer, its goal is to try and stamp out chronic homelessness.

When those who are part of the initiative heard about homeless people being removed from the bridge and headed down to the location.

Unfortunately, they were already gone.

They were able to track down two of the individuals and o get them emergency housing and will be placing them long term.

Mathy says "Housing First" has been able to place 70 people in the last 90 days. That is  more than they expected.

Angles Among Us says they only know of one person who was placed in housing. To their knowledge workers with "Housing First" were out at the site around 6 a.m. but then left.

Two of the "evicted" were still in temporary housing with the Angeles as of 7 p.m.