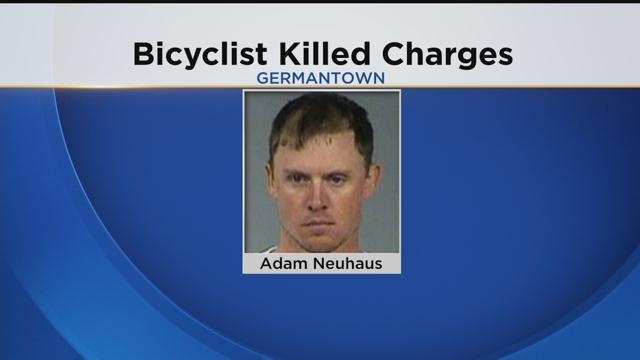 UPDATED: Defense Attorney Anthony Cotton is representing Adam Neuhaus. Cotton says Neuhaus thought he hit a deer, and Neuhaus understands a life has been lost, and that's the reason he came forward.

Cotton he and his client have been cooperating with the investigation since day one.

"As soon as we learned there had been a fatality, which was something he didn't know at the time, he thought he had hit a deer. The next day in the news he saw in fact somebody had passed away, so he contacted us and we made immediate arrangements to have his vehicle turned in so that the police could conduct their thorough investigation," said Attorney Anthony Cotton with Kuchler & Cotton S.C.

Charges for Neuhaus were filed more than six months after the accident. Cotton says some of the reason is because both sides went through months of negotiations regarding the two charges.

ORIGINAL: The driver charged with hitting and killing a bicyclist in Germantown is now being held on a $10,000 cash bond.

Adam Neuhaus, 31-year-old, is charged with running down a bicyclist more than six months ago.

It was back in August, when 50-year-old, Keith Habenicht was riding his bike on Appleton Avenue when he was hit and killed.

The day after, Neuhaus' attorney handed over the Menomonee Falls man's car to police.

But they tell us, he refused to make a statement and did not cooperate with the investigation.

Neuhaus is now facing homicide by negligent use of a motor vehicle and hit and run causing injury.