UPDATE: Dozens of Families Affected After Fire on 76th and Brown Deer 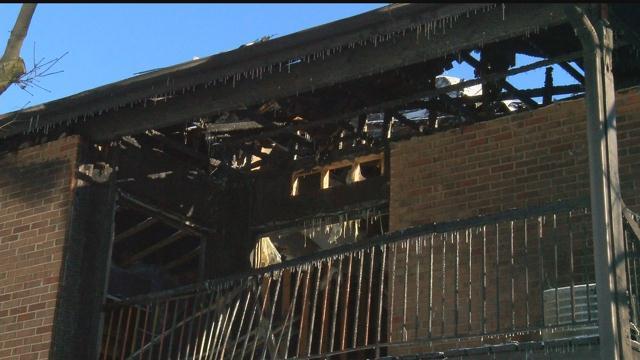 A repair company has been at the building much of the day, sweeping up embers and boarding burnt down doors. A handful of condos are nothing more than charred wood, leaving families without a home a week before Christmas.

The Milwaukee Fire Department says they believe the fire may have started in a first floor kitchen, but the cause is still under investigation.

Four out of 17 condo units are destroyed, and other have smoke or water damage.

The condo association president confirmed residents were able to get back into their homes on Sunday, but some of them came back only to embers.

The Red Cross assisted 20 people Saturday night, but they say some residents in the building weren't home.

"Sometimes when you leave your home, that's all you leave in -- what you had on. Not everybody had a chance to grab things. They just ran out and got safe which is a good thing; that's what you should do. We put a lot of blankets on people last night. We give them comfort kits. If you can't get back into your home you need shampoo and a brush," said Patty Flowers, Red Cross Regional CEO.

Flowers hopes those that were not home reach out to them for services.

On Monday morning, Red Cross case workers will help people get back on their feet.

The case workers can help with everything from a new credit card or ID to finding new housing or furniture.

If you would like to help with the displaced families or any other services from the Red Cross you can make a monetary donation, volunteer or donate blood. Visit www.redcross.org/local/wisconsin

Investigators said several families are affected by a fire that started in a condominium complex on 76th and Brown Deer road on Milwaukee's north side.

Milwaukee Police said the fire started around 7 p.m. in one of the condos. They said the fire was significant, badly damaging three units and impacting 18 others.

Police said a few dozen people were affected by the fire.

No one was hurt, and the Red Cross is working with families who are displaced.

Investigators are still working to figure out the cause of the fire.