UPDATE: Deceased Male Pulled From Pile Of Debris The Day After A Fire 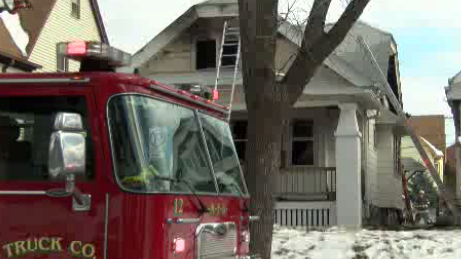 According to neighbors, passers-by are responsible for her rescue, but neighbors are stunned at the discovery made a day later where a man was found dead inside.

Neighbor Nina Tyler witnessed much of the fire and the events on Saturday.

"My daughter heard screams of, 'help'...literally the roof was falling apart -- falling, burning, wood, shingles. The windows were popping; we heard popping in the house," said Tyler.

The day after the fire, relatives of the 100-year-old woman stopped by the house, saying a family member was still unaccounted for.

"One of the relatives just kept saying we can't find our other sibling. He has not been seen. He's not answering his cell phone," said Tyler.

Tyler says the family was mourning their loss after the body was discovered.

"Very distraught, very emotional. They were very irate, all over the place, screaming. Emotions were all over," said Tyler.

As for the rescued woman, neighbor Nina Tyler says no one knows who the "heroes" are.

"No one knows who the guys are. They were just people riding down the street at the time of the fire. They aw the fire, pulled over and decided to go in for help," said Tyler.

Tyler says the men are heroes and hopes they come forward.

ORIGINAL: MILWAUKEE - The Milwaukee Fire Department responded to a structure fire at 11:49 a.m. on Friday afternoon. There was a large volume of fire coming out of the first floor of a two-story home near 26th and Locust. When emergency crews arrived on the scene, they were told that a woman was trapped in the burning building.

The first crews on scene located an unresponsive woman with burns to her face and hands on the back lawn. She was treated and transported to an area hospital. Neighbors had entered the home prior to the arrival of firefighters and removed the victim. One neighbor was treated on scene for difficulty breathing.

The fire department was able to get the fire under control at 12:35 p.m yesterday afternoon. The Milwaukee Fire Department along with Milwaukee Police were contacted today, March 5th, by the family of the burn victim and they were inquiring about a missing family member that also lived at the home.

Upon further investigation, police and fire returned to the boarded up fire building and discovered a deceased male under a pile of debris. His death and the cause of the fire is currently under investigation.

The Milwaukee Fire Department is also conducting an internal investigation to ensure that standard operating procedures and guidelines were followed.