UPDATE:City of Milwaukee evicts residents of south side trailer park 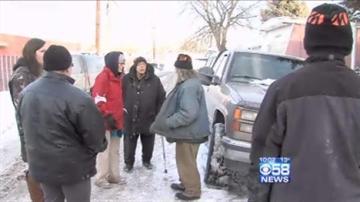 MILWAUKEE -- A growing number of residents living in a Milwaukee mobile home park near 27th and Howard could be forced to leave their homes. The City of Milwaukee put up eviction notices on many of the mobile homes at Evergreen Court located on the city's south side.

The notice says people can't live there, because the homes are unsafe or uninhabitable. The reasons include defective electrical, heating and plumbing systems.

Milwaukee Alderman Terry Witkowski says the city took possession of the property in foreclosure, and city inspectors got a look inside th homes during the last week of January. The previous owner of the property owed the city more than $300,000 in taxes before giving up the property.

The notice gave residents until February 3rd to vacate their mobile homes. Several resident are scrambling to find a place to sleep. Resident Kitty Wuerl says, \"There's a lot of disabled people in here, besides me and my roommate. Where's their compassion for other humans?\"

The people we spoke with plan to organize a group of residents to fight the eviction. They think repairs could be made, which would put the mobile homes back up to code.