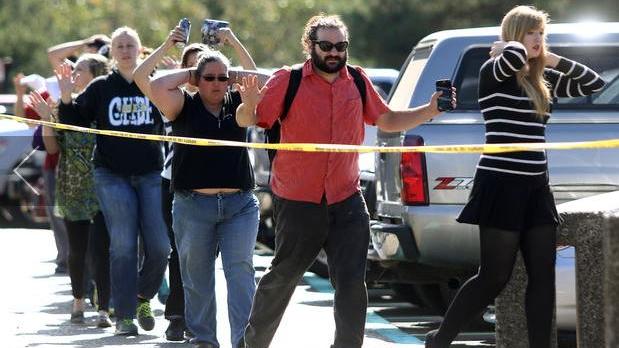 The shooting happened at Umpqua Community College in Roseburg, about 180 miles south of Portland, in Douglas County.

Oregon Attorney General Ellen Rosenblum said earlier Thursday that at least 13 people had died in the shooting and another 20 were wounded, but in a news conference Thursday night Hanlin said the number of fatalities stood at 10. The sheriff acknowledged that there had been conflicting reports but that is the most accurate number they have at this time.

Hanlin declined to release the name of the shooter or any of the victims.

Law enforcement sources tell CBS News four guns -- a combination of pistols and a rifle -- were found at the scene of the shooting.

In a brief statement to reporters, Oregon Gov. Kate Brown described the gunman as a 20-year-old man.

"We are holding the community of Douglas County in our hearts today," she said. Brown ordered flags at public institutions throughout the state lowered to half-staff.

Eighteen-year-old Kortney Moore of Rogue River tells the Roseburg News-Review newspaper that she was in a writing class when a shot came through a window.

She says the gunman entered her classroom, told people to get on the ground and then asked people to stand up and state their religion before opening fire.

Krys Denino, a mother of two and first-year nursing student at the college, was on campus when the shooting started.

She told CBSN by phone that she initially thought what she heard was from a construction project and didn't realize the sounds were gunshots until she saw a young woman running toward her. She heard another gunshot and then started running to her car.

A photographer for the Roseburg News-Review newspaper said he saw people being loaded into multiple ambulances and taken to the hospital.

The sheriff's office reported on Twitter that it received a call about the shooting at 10:38 a.m.

Douglas County Sheriff John Hanlin said at a news conference Thursday afternoon that officers from around the county immediately responded to the college and upon arriving there, located the shooter in one of the buildings on campus.

Hanlin said officers engaged the suspect and there was an exchange of gunfire and the shooter was "neutralized." Officers then searched student's backpacks for weapons and used dogs to check in the parking lot.

Lacey Gregory was just 100 yards away when the gunfire started. She told the "CBS Evening News" she saw people running.

CBS News correspondent Ben Tracy reports authorities believe shots were fired both inside Snyder Hall and the nearby science building on the campus of more than 100 acres.

Students in the school tweeted as the shooting unfolded, one saying, "Students are running everywhere. Holy God."

And then, "Scariest thing I've ever experienced."

Sheriff Hanlin would not comment on the number of fatalities and said the investigation was "very active."

According to Hanlin, the Oregon State Police, the FBI, the U.S. Marshals Service, and multiple local law enforcement agencies are assisting in the investigation.

Students and faculty members were being bused to the Douglas County Fairgrounds, the sheriff's office said.

A spokeswoman for the Oregon department that oversees community colleges in the state said she had not received any detailed information about the shooting.

The school has about 3,000 students. Its website was down Thursday. The university posted on Twitter that it would be closed until Monday.

Mercy Medical Center in Roseburg received several patients. Their conditions were not available.

PeaceHealth Sacred Heart Medical Center in the Eugene-area said it received three female patients between the ages of 18 and 34 via helicopter. Dr. Hans Notenboom of the emergency department said two of the patients went directly into the operating room.

The hospital later tweeted that two of the victims were in serious condition and one in critical.

Former Umpqua Community College (UCC) President Joe Olson, who retired in June after four years, said the school had no formal security staff, just one officer on a shift.

One of the biggest debates on campus last year was whether to post armed security officers on campus to respond to a shooting.

"I suspect this is going to start a discussion across the country about how community colleges prepare themselves for events like this," he said.

Interim UCC President Rita Cavin said at a news conference that the school has a no guns on campus policy. CBS News correspondent Ben Tracy reports, however, that in Oregon, students with proper permits are allowed to carry guns on campus.

Hours after the attack, a visibly angry President Barack Obama spoke to reporters, saing the U.S. is becoming numb to mass shootings and that their perpetrators have "sickness" in their minds.

"It cannot be this easy for somebody who wants to inflict harm on other people to get his or her hands on a gun," Mr. Obama said. "We collectively are answerable to these families who lose their loved ones because of our inaction."

"My wife teaches at a community college," Biden said. "It brings it home, every time something happens at a school. The safest place on Earth should be our schools and our colleges."

The rural town of Roseburg lies west of the Cascade Mountains in an area where the timber industry has struggled. In recent years, officials have tried to promote the region as a tourist destination for vineyards and outdoor activities.

According to Everytown for Gun Safety, a gun-control group founded by former New York City Mayor Michael Bloomberg, 88 people are killed by gun violence in America each day. Since the December 2012 shooting at Sandy Hook Elementary School in Newtown, Connecticut, there have been at least 142 school shootings in America -- an average of nearly one a week, the organization says.

John Hanlin, the sheriff overseeing the investigation into the shooting in Oregon, has been vocal in opposing state and federal gun-control legislation. He registered his opposition this year as state lawmakers considered requiring background checks on private, person-to-person gun sales.

Hanlin told a legislative committee in March that a background-check mandate wouldn't prevent criminals from getting firearms.

He said the state should combat gun violence by cracking down on convicted criminals found with guns, and by addressing people with unmanaged mental health issues.

Hanlin also sent a letter to Vice President Joe Biden in 2013, after the shooting in Newtown. Hanlin said he and his deputies would refuse to enforce new gun-control restrictions "offending the constitutional rights of my citizens."

Democratic presidential candidate Hillary Clinton said Thursday that it's beyond her comprehension that "we are seeing these mass murders happen again and again and again."

Clinton said that the nation needs to "get the political will to do everything we can to keep people safe." She says there's a way to have sensible gun control measures that keep firearms out of the wrong hands and save lives. The former secretary of state says she's committed to doing everything she can to achieve that.