UPDATE: 10 Bison in Kenosha County Euthanized after Getting Loose 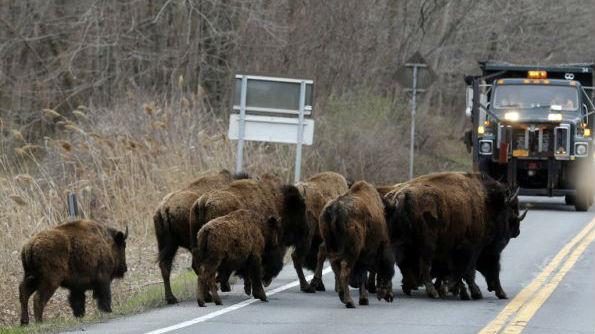 UPDATE: After several attempts to contain the loose bison failed, and after consultation with veterinarians and other animal experts; the owner of the bison made the decision to euthanize the remaining loose bison. This difficult decision was due to concerns for the safety of area residents and passing motorists.  The owner was very concerned about the community and wanted to ensure that no one was injured.

A total of ten bison had to be euthanized. Seven bison have been safely corralled and are back at the Town of Paris farm. There is no further danger to the community.

No one was injured during Saturday's incident.

Motorists in western Kenosha County are being asked to drive with caution because of loose bison in the area.

Sheriff Deputies received a call around 8 AM Saturday that a herd of bison got loose from a farm. Initial reports were that the bison were able to escape their enclosure due to a fallen tree that had compromised the fence.

Deputies corralled eight of the bison with the help of farm staff and neighbors. The others are still on the loose.

The bison have been spotted in the area of Highway K and Highway EW.

Some roads in the area have been blocked off.