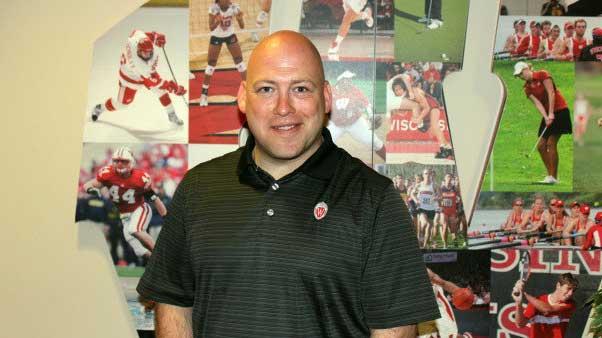 \"I am excited to get a coach of Luke's background to join our staff,\" Eaves said. \"If you look at his resume, in kind of academic terms, he's got his Ph.D. in coaching.

When asked about his decision to join the Badgers staff, Strand explained, \"the opportunity to be at the University of Wisconsin for me is a bucket-list opportunity that in being from the state is impossible to pass up.\"

Strand will move his office about three miles, from the Alliant Energy Center to the Kohl Center, as he comes to the Badgers after spending the past year as the head coach and general manager of the USHL's Madison Capitols.

\"When I asked Luke why he wanted this job, he said it was because of the 'W.' He is a Wisconsin lad,\" Eaves stated. \"He played at UW-Eau Claire, coached at UW-Eau Claire and got his coaching start up at St. Norbert's with Tim Coghlin. He's been in Green Bay. He knows what the `W' is all about. That was an important factor.\"

Born in the Philippines, Strand grew up in Wisconsin, and has spent much of his time in the state since skating for UW-Eau Claire in the mid-1990s. After obtaining a degree in kinesiology, with a minor in psychology of sport, he played professional hockey for the UHL's Madison Monsters and Kodiaks, before taking an assistant coaching position at NCAA Division III St. Norbert College in DePere. In three years at St. Norbert, the team reached two Frozen Fours.

Strand moved on to become an assistant coach and assistant general manager with the USHL's Green Bay Gamblers from 2003-05. From there, he headed west, all the way back to UW-Eau Claire to become his alma mater's head coach for two seasons.

The AHL's Houston Aeros is where Strand worked with Constantine. There, he helped the Aeros improve 30 points in the standings in the first year, before the team reached the Calder Cup Western Conference Finals in his second season.

Strand then moved on to become the head coach and general manager of Sioux City (USHL) for the following two seasons (2009-11). He directed the Musketeers to a 58-47-15 mark during his tenure. While in Sioux City, he also served as an assistant coach for gold medal-winning Team USA at the 2010 World Junior A Challenge that was held in Penticton, British Columbia.

He returned to the AHL as an assistant coach from 2011-13, this time with the Abbotsford Heat

In 2013, Strand became a consultant with the Green Bay Gamblers. He also became the coach and director of player development with Team Wisconsin U-16, while returning to Sioux City as the team's general manager. Sioux City reached the Western Conference Finals during that season.

After one year, Strand moved on to the Madison Capitols to head the first-year program.

\"I think one of the things Luke will provide for me on a personal level is that he will push the boundaries,\" Eaves added. \"When you have that kind of mind within your staff, you are going to look hard at different things and you are going to hammer out the plan and then you are going to execute the plan. That will be very much a positive.